Former Wimbledon finalist Mark Philippoussis has come on as a consultant coach for Thanasi Kokkinakis - and he's imploring the young South Australian to be more aggressive on grass. 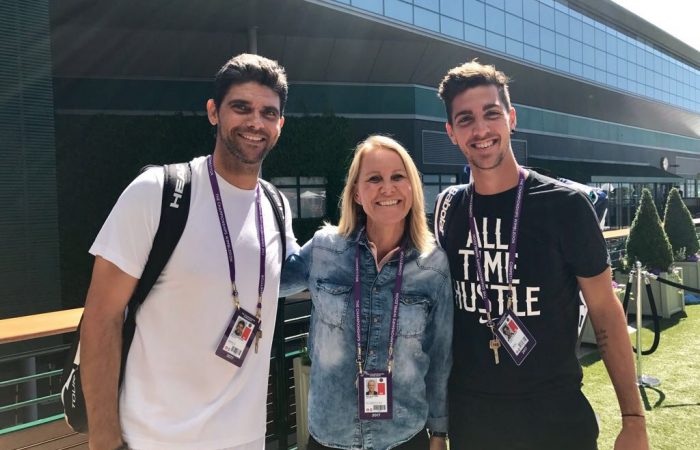 Thanasi Kokkinakis has turned to Mark Philippoussis for added inspiration and grasscourt intellect in his concerted attempt to make a Wimbledon impact.

Australia’s one-time teenage prodigy returns to the All England Club – where he won the junior doubles crown in 2013 with Nick Kyrgios – as the world No.498 after a depressing near-two-year battle with injury.

But after taking down Milos Raonic, last year’s runner-up and world No.6 at the Queen’s Club lead-up event, Kokkinakis has suddenly re-emerged as a dangerous young talent to avoid, ahead of his first-round blockbuster with Juan Martin del Potro on Tuesday.

And now even more so following the 21-year-old’s commissioning of Philippoussis as a special Wimbledon consultant.

Runner-up to Roger Federer in the 2003 title decider on London’s hallowed lawns, Philippoussis is passionately – and vocally – adding the finishing touches to one of the sport’s hottest young prospects.

Specifically, he wants Kokkinakis to better utilise his big serve and forehand – the same deadly weapons that Philippoussis himself deployed to beat a dozen different world No.1s during a successful but unfulfilled Grand Slam career – to ensure the South Australian lives up to his own rich potential.

Still working chiefly with long-time coach Todd Langman, Kokkinakis credited his part-time mentor’s influence as decisive in his comeback win over Damir Dzumhur and indicated he was open to more regular input from Philippoussis.

“He’s helped me for a long time, just like in and out whenever he can. Obviously he’s very busy with his own things,” Kokkinakis told AAP.

“But Indian Wells a few years ago he was out there watching and he’s always sending me messages of encouragement. Someone like that, obviously it helps having them around for a little.

“But you want to have it day in, day out to see what he can bring. It’s tough to make a massive change in two, three days but we’re going to have a crack.

“It’s good having him there. He’s just a good guy, first of all, and he’s a legend in the sport, especially in Australia.”