Ash Barty believes her comfort and form on grass could be the key to taking down No.4 seed Elina Svitolina in the first round at Wimbledon. 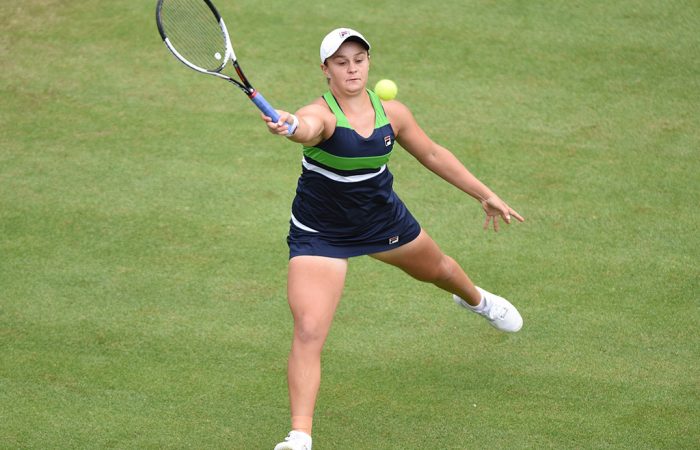 In-form Ash Barty is hoping her soaring confidence and grasscourt guile will be enough to carry her to the first big upset of the 2017 Wimbledon championships.

Fresh off a run to the final in Birmingham and rapidly closing in on the top 50, Barty takes on fourth seed Elina Svitolina on Monday believing she’s a genuine chance of surprising the French Open quarterfinalist.

Australia’s former Wimbledon junior champion is back in the main draw for the first time since taking a break from tennis in 2014 and enjoying a successful stint playing professional cricket.

“The match-up is obviously a very tricky one and Elina’s been playing some phenomenal tennis year. She’s had her best year so far, but I’m very excited,” Barty said on Sunday.

“I love coming out on these courts and hopefully I can execute what I want to do and do a lot of damage.”

Svitolina edged Barty in three sets in their only previous meeting, on a hard court earlier this year. But Barty believes clashing on grass can prove a leveller.

“I felt we had a good match in February in Fed Cup and I was certainly in the match,” said the 21-year-old.

“So I think I can change up a few things here and sort of try to use the grass as best I can. It’s no secret on the grass that I need to serve well and use my slice to try and get forehands and I can control the court.

“It was just a matter of time and to finally get my first top-20 win was really exciting and I feel great and comfortable on the grass and ready to go.”