Kokkinakis shines at The Boodles

A week on from his giant-killing exploits at Queen's, Thanasi Kokkinakis produced another strong performance at The Boodles exhibition event. 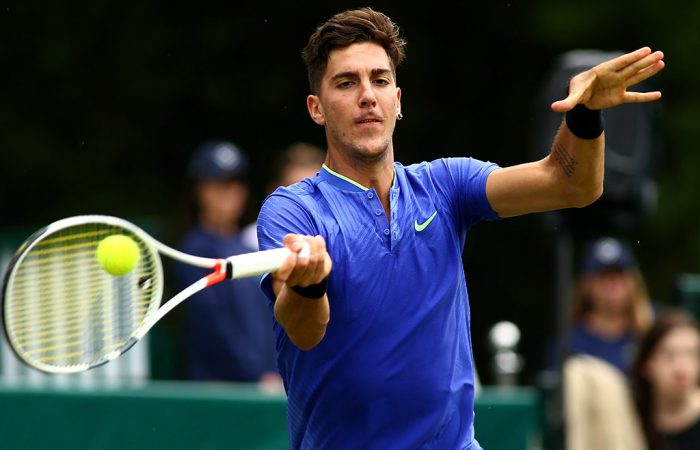 Thanasi Kokkinakis has continued to improve as he warms up for Wimbledon at The Boodles exhibition event.

Just one week after he upset 2016 Wimbledon finalist Milos Raonic at Queen’s Club, the 21-year-old Australian produced a dominant 6-4 6-2 win over world No.16 Gilles Simon.

“Two years ago I came here, loved it. I was a little bit sick last time I played, but I enjoyed the atmosphere. It’s a great place to find your feet a little bit before the grasscourts at Wimbledon.

“It’s pretty easy-going. A lot of the hard work’s done, you’ve played a lot of serious matches before. You kind of want to feel good, relax a little bit, and still keep your game going, so The Boodles is perfect for that.”

Despite the wins over Raonic and Simon – himself a former top-10 player – Kokkinakis, who is continuing to make his way back from 18 months of injury woes, is keeping a lid on his own expectations of what he can do at the All England Club.

After all the highs and lows were evident at Queen’s when he was hapless in the second round against rising Russian Daniil Medvedev, losing 6-2 6-2.

“Hopefully I get a decent draw, but again, I had a good win last week over Raonic, so I know I can play good tennis,” he said.

“The trouble is maintaining my level. My good is good, my bad isn’t so great at the moment. So I’m just trying to get better.”

In the other match before rain stopped play for the day Croatia’s Borna Coric easily accounted for Ricardas Berankis 6-3 6-3.