Ash Barty put up a great fight but ultimately could not stop Petra Kvitova winning her first title since returning to tennis after a knife attack. 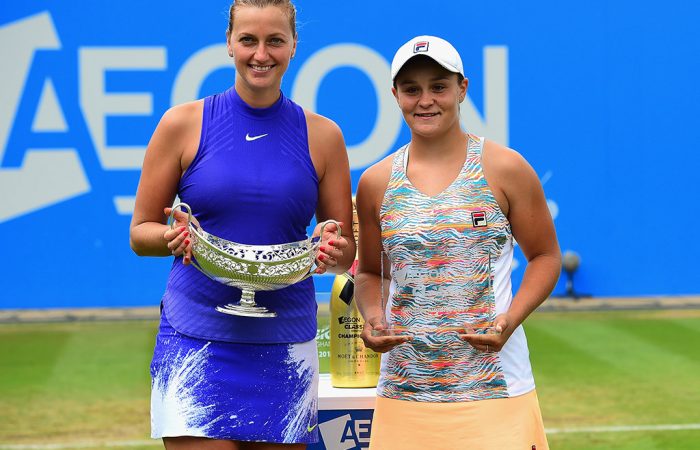 Ash Barty’s brilliant week in Birmingham came to an end on Sunday with a three-set loss to Petra Kvitova in a high-quality final.

Barty, who was playing in her first grasscourt final and first WTA Premier-level decider, fell 4-6 6-3 6-2 to the Czech.

It was a heart-warming result, with this being just Kvitova’s second tournament back after she was the victim of a knife attack that damaged her playing hand in December 2016.

“I think it was a pretty high quality match,” Barty said.

“We both started well and I served particularly well in that first set and I think it gave me the upper hand.

“I’ve played some quality tennis and lost to only a couple of good players. So I’m really excited and I can’t wait to get to Wimbledon.”

Barty began brightly with a break in the third game, and it was all she needed to keep her nose in front and take the first set against the erratic Kvitova, who mixed aces and powerful winners with double faults and errors.

Yet the second set took a turn towards the Czech when Kvitova broke in the second game after some errors from Barty, which until that point had been largely absent from the Australian’s game.

Kvitova surged to a 5-1 lead before Barty rallied, breaking serve and then holding to close the gap to 5-3.

Yet Kvitova, helped by two aces in the ninth game, served it out on her second attempt to send the match into a third.

With her confidence growing, Kvitova was in full flight, producing an increasing volume of winners and breaking the Australian in the first game of the third.

Barty, thanks to some incredible defence on a point that ended when Kvitova fired an overhead long, recovered the break, but from 40-0 up in the fifth game at 2-2, the Queenslander would win just one more point.

Kvitova clicked into a higher gear and the winners flowed off her racquet – she finished the one hour, 47 minute contest with 35, to Barty’s 14.