Queen’s: Kokkinakis brought back to Earth

For the second straight week, Thanasi Kokkinakis found fellow young gun Daniil Medvedev too hot to handle on a grasscourt, going down to the Russian in straight sets at Queen's. 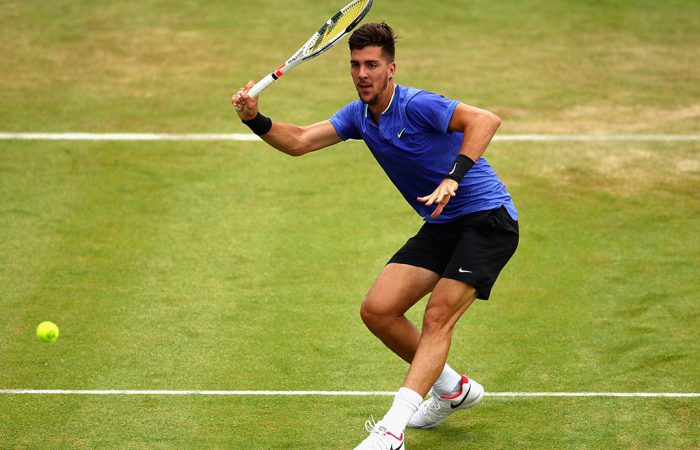 A brutally honest Thanasi Kokkinakis says it will take him a while to recover mentally from his limp display against Danill Medvedev at Queen’s Club.

Buoyed by his fantastic victory over Milos Raonic two days earlier, the South Australian looked a pale imitation as he crashed out 6-2 6-2 in less than an hour on Thursday.

Kokkinakis admitted he felt nervous and tight before the match and claimed he would have failed to beat a Futures player in what he called the worst performance of his career.

The highs and lows…

“I don’t think I played this bad before ever,” Kokkinakis said. “It’s tough obviously with a bit of expectation after getting my best-ever win last match.

“That’s tennis. You can be up one minute and the next minute feel very far down.”

The 21-year-old said his dismal showing had nothing to do with his fitness as he continues on the comeback trail after a injury-plagued 18 months, and made no excuses.

“Yeah, I’m sore but that wasn’t the reason today. My body didn’t really hold me back.

“The way I played today, I don’t think I would have beaten a futures player … I just need to get better.

“I was just trying to loosen up my shoulders and play free. I couldn’t do it. Even in the warm-up I felt tight, so I thought, ‘This is not looking good’.”

Kokkinakis will play some exhibition matches before Wimbledon starts on 3 July but said it’ll take some time to get over losing so badly to the world No.60 – for the second time in as many weeks.

“My serve and forehand are usually the things I rely on and even those were off with the fairies somewhere. I don’t know what it was,” he said.

“I couldn’t put a ball in the court. It was horrible. I’m dwelling on it big time.

“I wish I could put it to one side. As tennis players you have to have short-term memory but for me, this one is probably going to stick around for a while.”