Why we love Thanasi Kokkinakis 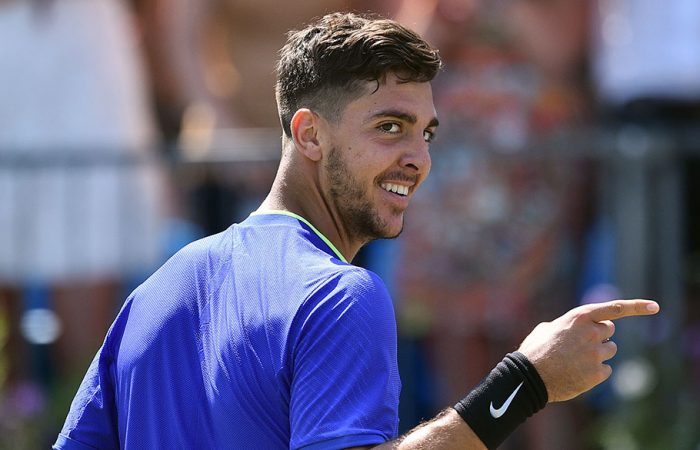 Cheeky: At a pre-AO2014 function for racquet sponsor Babolat, the then 17-year-old interviewed Rafael Nadal. “If we both win our first round match here we play each other. Will you be nervous?” Thanasi mischievously enquired. Among those who promptly roared with laughter, was of course Rafa himself.

Respectful: When that AO match with Nadal eventuated, the young Aussie competed with obvious respect. It’s the flipside to a natural humour for Kokkinakis, who talks often about the history of tennis and heroes he’d love to emulate. Fellow South Australian Lleyton Hewitt is always a special mention.

Loyal: Asked about the challenges he’s already navigated in his career, Kokkinakis is quick to acknowledge those who’ve supported him – especially parents Trevor and Voula, brother Pan and Todd Longman, his coach of more than 12 years. “I have been pretty resilient during this time,” said Kokkinakis of his recent injury battles. “My coach and family are a big part of that, especially Todd, who has been with me since I was nine.”

Unfiltered: Who could forget the victory laps the 17-year-old Kokkinakis completed as he celebrated his first AO main draw with fans on Melbourne Park’s court three? Thanasi’s high fives with fans were a memorable feature on the same court the following year too. That unfiltered joy was equally clear – and contagious – as Kokkinakis happily celebrated his first top-10 win over Milos Raonic at Queen’s. Marat Safin was Kokkinakis’ childhood idol – and like his hero, the charismatic Aussie loves to show his personality on court.

Popular: He’s shared training blocks with Roger Federer and has also practised and played doubles with Andy Murray, who Kokkinakis considers a friend. The camaraderie among his Aussie tour-mates – including Nick Kyrgios and Jordan Thompson (his partner in winning the Brisbane doubles title) is especially clear. The popularity extends throughout the tours: among more than 11,000 likes for Kokkinakis’ Instagram post celebrating the Raonic upset was one from Victoria Azarenka. Who doesn’t like the guy that everybody else does?

Engaging: A lover of basketball, Playstation and hanging out with his many friends, Kokkinakis is hardly a player who avoids the limelight: in fact, he’d rather join in the fun. At Wimbledon in 2015, he delivered pizza to Aussie fans queuing overnight – a visit that included singing, testing out their tent and trying on their shirts.

Plucky: Major shoulder surgery, torn abdominal muscles, osteitis pubis, a torn pectoral muscle, elbow complaint, serious groin problem and a back injury all feature on Thanasi’s recent medical history. It takes serious resilience to overcome all that. Persistence is equally clear in the South Australian’s game too: In his upset of Milos Raonic at Queen’s, he staved off eight break points in the first set, and three set points in the second. Few things thrill fans more than a player who can fight.

Deserving: Most would agree that few players deserve wins more than the talented young Aussie – especially when he’s so candid about what it has taken to achieve them. After his biggest career win at Queen’s, Kokkinakis admitted that as recently as several weeks ago, he considered quitting tennis. “As soon as the week before French Open, I wasn’t feeling great mentally. I was in all sorts,” he told the ATP World Tour. “I was hating being out there, kind of dreading practice a little bit … five minutes in I’d be like ‘why do I do this?’ but then matches like today give you that assurance of why you do it and hopefully this is just the beginning.”

Exciting: Given everything that Kokkinakis has already achieved and endured, it’s easy to forget that he only recently turned 21. Clearly, the exciting young star has the mentality to match his power and freakish athleticism. So long as he’s healthy, the future can only be bright.