Bernard Tomic found Tomas Berdych too strong in Stuttgart while Thanasi Kokkinakis, competing in 's-Hertogenbosch with a protected ranking, fell to Daniil Medvedev. 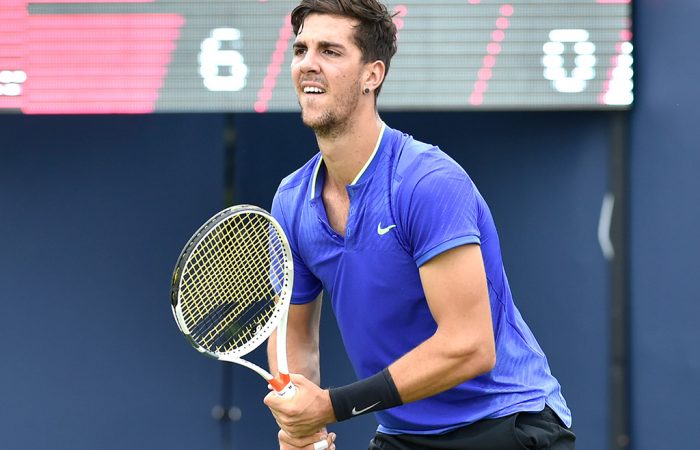 Thanasi Kokkinakis is out of the ATP tour event in Den Bosch in the Netherlands.

The 21-year-old Australian, on the comeback trail after missing more than a year through abdominal and shoulder injuries, lost 6-3 7-6(3) to Daniil Medvedev of Russia on Thursday.

Kokkinakis claimed his first Tour win since August 2015 on Tuesday when he beat Medvedev’s countryman Mikhail Youzhny in the first round.

Top seed Marin Cilic survived a scare after dropping the opening set to Serbia’s Janko Tipsarevic in a tiebreak.

In Stuttgart, No.3 seed Tomas Berdych saw off the challenge of Australia’s Bernard Tomic.

After a tense first set, Berdych ran out a 7-6(4) 6-2 winner in one hour and 16 minutes to set up a quarterfinal match against Feliciano Lopez.

“It was good, it was a very good match,” Berdych said.

“He plays a very different style. We played already four times before, all of them were battles but today was probably the easiest. I was ready, I was prepared and I think that’s why I deserve the win.

“He’s a very different player, very talented and very good touch in the hand but I found my weapons and I played better.”

Ash Barty is the only Australian remaining in tour-level grasscourt action this week; the Queenslander takes on No.1 seed Johanna Konta in the quarterfinals in Nottingham on Friday.