Nick Kyrgios has sent Australia through to the Davis Cup semi-finals with an emphatic straight-sets win over American Sam Querrey. 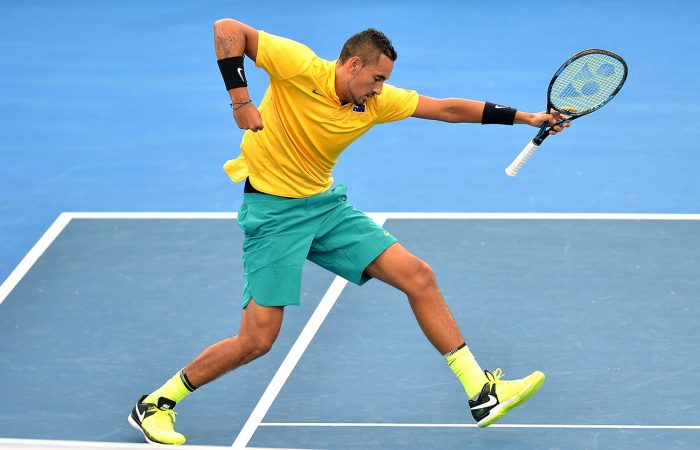 Nick Kyrgios has sent Australia through to the Davis Cup semi-finals with an emphatic straight-sets win over American Sam Querrey.

It is just the second time in the last 11 years Australia have made this stage of the competition, with a trip to Belgium or a home semi-final tie against Italy to come in September.

US captain Jim Courier threw another curve ball by sending world No.25 Querrey onto Pat Rafter Arena instead of No.15 Jack Sock, who was originally slated to face the in-form Kyrgios.

Querrey had prevailed in his last meeting with Kyrgios in the semi-finals of February’s Mexican Open and has the same type of power-serving style as the lanky John Isner, who troubled the 21-year-old on Friday before he turned the tables and claimed an opening day victory.

However Kyrgios produced another commanding performance and showed more signs of his newfound ability to produce under pressure, breaking Querrey twice after the American led 4-1 as he attempted a comeback in the third set.

He then wrapped up the two-hour victory with the last of his 21 aces, comfortably outserving Querrey, who hit only eight.

“It was a tough third set there, I was down a break and obviously a lot of emotions – I was close to the finish line,” Kyrgios said.

“There were a lot of ebbs and flows, and I knew I hit a bit of a flat patch at the start of the third set.

“But (with coach) Lleyton (Hewitt) on the side telling me to compete for every point, and obviously the crowd, it’s easy to get up out here.”

Kyrgios also defended seven break points and stayed focused through moments when he could have previously lost his concentration.

Just like he did against Isner, Kyrgios took a while to warm up and fell 3-0 down in the first set, double-faulting twice in his first service game.

But he quickly found his groove, breaking back with a cracking forehand return in the seventh game before forcing and winning the tiebreak.

Sam Groth will battle Isner in the fifth and final rubber.

Australia has not made the final of the Davis Cup since the last time they won it in 2003.