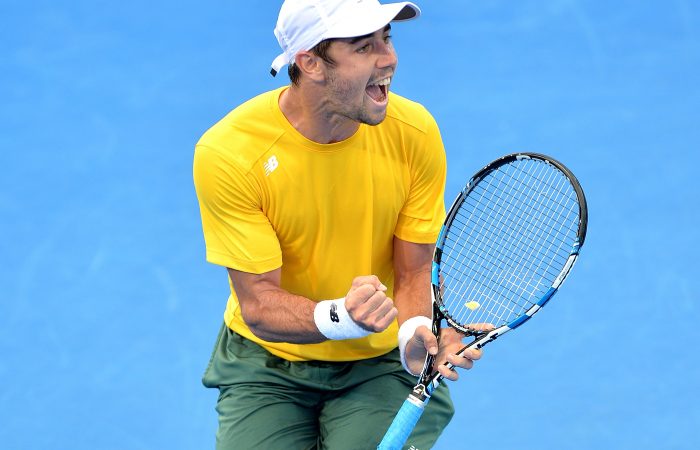 Jordan Thompson has scored the biggest win of his career over top-ranked American Jack Sock to give Australia an unexpected 1-0 lead in their Davis Cup quarterfinal in Brisbane.

It continues the 22-year-old’s undefeated run in green and gold after he won both his singles rubbers on debut against the Czech Republic at Kooyong in February in straight sets.

“Wearing the green and gold, there’s no greater honour,” Thompson said in his on-court post-match interview.

The top-ranked player in the tie at No.15, Sock looked tired and made 66 unforced errors to 44, with his forehand – considered his biggest strength – unusually off key.

Two double-faults and two mistimed forehands from Sock gave Thompson the first break of the match at 5-3 in the first set.

The American double-faulted again on the first and last points of a thrilling third-set tiebreaker and was unable to snatch back the momentum after that point.

Thompson broke his serve twice in the fourth set and then closed the match out in style before celebrating with delighted Australian captain Lleyton Hewitt.

Thompson explained how he broke down Sock’s game.

“Just playing within myself, not trying to go too big. It’s not within my game style,” Thompson said. “Try and wear him down, I think I’m fit enough to do that.”

Sydney-born Thompson upset Spaniard David Ferrer in the Brisbane International at the same venue earlier this year but Sock – who has been in stellar form this year – represents by far his biggest scalp to date.

It also turns the tie on its head, with the red-hot Nick Kyrgios due to take on John Isner next, before Saturday’s doubles rubber.