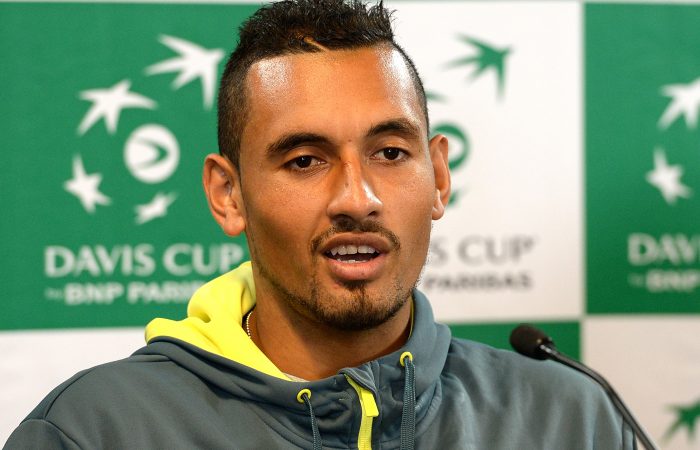 Nick Kyrgios will relish the energy and support of a parochial home crowd when he leads Australia’s Davis Cup charge in their quarterfinal tie against the United States in Brisbane starting on Friday.

World No.16 Kyrgios has been drawn against John Isner in the second singles rubber at Pat Rafter Arena, with world No. 79 Jordan Thompson to face top-ranked American Jack Sock in the opener.

It comes a week after 21-year-old Kyrgios, in the best form of his career, battled a sometimes hostile crowd in his epic semi-final battle with Roger Federer at the Miami Open.

“Even though the crowd was majority in Federer’s favour, which it should be, I thought the atmosphere was amazing,” Kyrgios told reporters.

“I’m looking forward to getting back here and having some home support. I think anything is possible this year.

“I feel comfortable playing second. I’ll be out there for some of Thommo’s match and I think it’s a good match up with him against Sock.”

Big-serving Isner has claimed victory in two of his three previous encounters against Kyrgios but the Australian won their most recent meeting in the final of last year’s Atlanta ATP event.

“In my opinion I think he’s a lot more mature now,” Isner said. “Right now, a lot of people could argue he’s playing maybe the best tennis he’s ever played.

“Everyone knows what he can bring to the table. He’s an incredible player but I’m a little bit used to the match-up.

“If our match does go to five sets I think it would make for a pretty cool atmosphere out there at the very least.”

Thompson is playing in the Davis Cup for just the second time, but won both of his matches against the Czech Republic in February’s first-round clash, where he also played in the opening clash.

“The positive is that Jordan has been in this situation before,” captain Lleyton Hewitt said.

“He knew exactly what time he had to go out there and do all the right prep.

“It’s going to be two tough matches tomorrow but we’ll be up for the challenge.”

Thompson, 22, was aware of the big task he faced against Sock, the highest-ranked player in the tie at No.15 and in the midst of a similar purple patch to Kyrgios.

“He’s got a great serve and a really big forehand, he’s got a lot of revolutions on it. He’s been in good form, I think he’s up there with the most wins this season so far,” he said.