Ash Barty claimed the first WTA title of her career with a straight sets win in the Kuala Lumpur final. 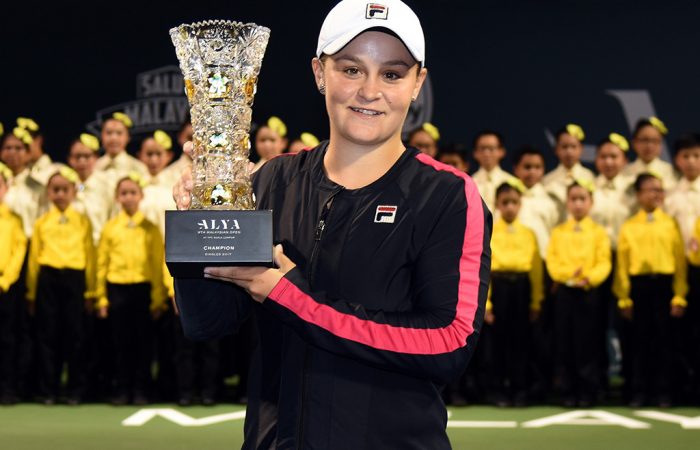 Ashleigh Barty’s tennis resurgence has surprised even herself, with the young Australian admitting her maiden WTA singles title came earlier than expected.

The 20-year-old breezed past Japan’s Nao Hibino 6-3 6-2 in a rain-hit Malaysian Open final in Kuala Lumpur on Sunday (Monday AEDT).

The win secures her a spot in the world’s top 100, guaranteeing direct entry for grand slam events.

“I’m over the moon, I don’t really know what to say, I’m a bit speechless,” said qualifier Barty after beating Hibino.

“It’s a tribute to all the work we did in the off-season, and last year, coming back.

“It hasn’t quite been 12 months since I started playing singles again. I’m certainly happy to be back.”

The result continues a positive 2017 for Barty, who only returned to tennis last year after leaving the world tour for a sabbatical which included a stint with Women’s Big Bash League cricket side Brisbane Heat.

She progressed to the third round in her previous two events at the Australian Open and in Hobart. following a competitive three-set loss to then-world No.1 Angelique Kerber in the second round of January’s Brisbane International.

In Kuala Lumpur, the Queenslander faced a relatively easy draw but beat four higher-ranked players to claim the trophy, including world No.106 Hibini.

Barty, ranked 158 in the world, served seven aces during the match, which was halted for more than an hour in the first set due to rain.

She then showed her mental tenacity against Hibino and kept her momentum rolling into the second set to wrap up the match in an hour and 13 minutes.

“Nao had an amazing week, had some fantastic results,” said Barty.

“I was ready to go and did the best that I could tonight – and thankfully it was enough to get over the line.”

Her success in Malaysia wasn’t limited to singles, teaming up with compatriot Casey Dellacqua to also claim the doubles crown with a straight-sets win over Nicole Melichar and Makoto Ninomiya.