Thompson to learn from scorching Sydney 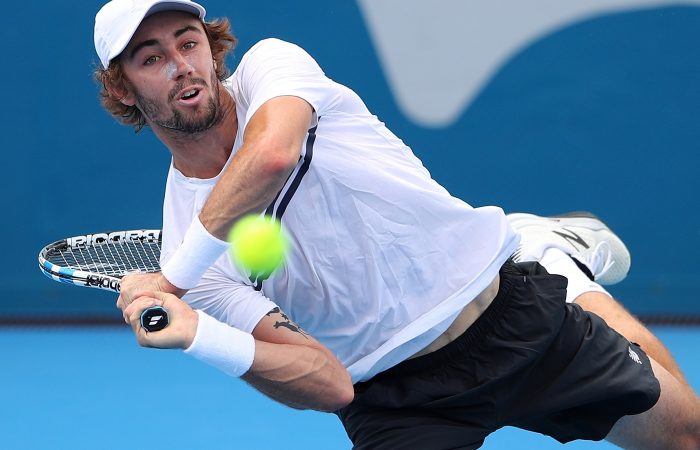 Jordan Thompson’s impressive Australian Open preparation has been curtailed by Germany’s Philipp Kohlschreiber at the Apia International Sydney, but the wildcard could see the upside of testing himself in 41C heat.

The 22-year-old caught the eye in Brisbane last week with victory over David Ferrer and clinching the Men’s Doubles title alongside countryman Thanasi Kokkinakis.

Thompson progressed to the second round in Sydney but the world No.32’s artillery proved too much. He struck 10 aces and carved out break opportunities but Kohlschreiber’s experience told in a 7-5 6-4 triumph.

The youngster suggested the stifling heat that struck his home city could actually be beneficial.

“Playing in these conditions, it’s good preparation (for the Australian Open),” Thompson said.

“It definitely can’t hurt. “It was pretty warm … (but) I don’t think it was too bad. It was just really tricky conditions. It was a little bit swirly at times and the balls were flying.”

Thompson, having being broken at 5-5 in the opening set, vowed to learn from his final singles match before the Open.

The Sydneysider added belief would not be an issue at Melbourne Park following his strong start to 2017.

“The main thing is just getting matches. I think matches builds confidence,” he said.

“I have won plenty of matches already (in 2017). Won doubles matches as well. I’ll be pretty confident. It’s prepared me for the Aussie Open.”

Matthew Barton, gunning for his maiden ATP quarter-final appearance, fought back in roasting heat to send his match against Gilles Muller into a deciding set.

Barton shot to prominence having dispensed of Great Britain’s Top-50 prospect Kyle Edmund in the first round, but he was eventually ousted 6-1 3-6 6-4 in just under two hours.

Teenage sensation Alex De Minaur was gunning for the final eight but retired with a slight abdominal strain when trailing Andrey Kuznetsov on Wednesday night.