Jaimee Fourlis is the latest Aussie teen to take her place in the Australian Open women's draw, just one member of an exciting group of emerging female players. 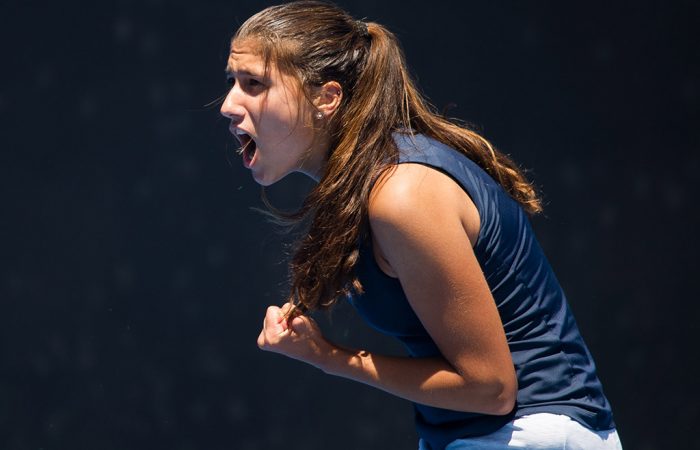 Jaimee Fourlis’ victory at the Australian Open Play-off was the latest chapter written in the unfolding tale of Australia’s young female tennis success.

The 17-year-old’s victory over Abbie Myers in Sunday’s final earned her a wildcard into the main draw of Australian Open 2017. And she’s not the only Aussie teen who will appear in the women’s draw.

A week earlier, 16-year-old Destanee Aiava secured her place by winning the 18/u Australian championships, defeating Fourlis in that final.

And in late November, Lizette Cabrera, who turns 19 today, was awarded a wildcard after a magnificent season during which she rose from outside the top 1,000 to a career-high ranking of No.213 and closed 2016 with a trip to the final of an ITF $50,000 event in Japan.

“I think it’s pretty awesome (our simultaneous success). It’s a great bunch of girls, we’re all pretty close, all great friends. I think we just help each other and just thrive off each other,” Fourlis said during the AO Play-off.

“I’m happy for everything – last year Maddi (Inglis) won (the AO Play-off), Pri (Priscilla Hon) won 18s, Kim (Birrell) got a wildcard as well, and this year Destanee played some awesome tennis back half of the year. Everyone deserves what they’ve got.

“There’s a whole bunch of girls, I could name a lot of names who are coming through. And it’s really great to see. Honestly it’s really good. Hopefully really good for women’s tennis.”

It’s an encouraging sign given that many of Australia’s current premier players, like Sam Stosur and Casey Dellacqua, are in the latter stages of their careers.

More recently, 22-year-old Daria Gavrilova has joined the ranks, and like Stosur trains regularly alongside the new generation of girls at Melbourne’s National Tennis Centre.

Fourlis said the experience of training with Australia’s top women had been invaluable.

“You learn everything. You learn the one-percenters they do – they’ll come back after training and they’ll stretch even more, they’ll pick up their own cones at the end of training sessions. Those little things,” she said.

“They (Stosur and Gavrilova) are awesome girls. They work incredibly hard and I’m pretty honoured to be around them.”