Victories for Jasika, Kempenaers-Pocz in 12/u champs

Amor Jasika started an exciting day for his family off on the best possible note in the 12/u Australian Championships, while Charlotte Kempenaers-Pocz dominated the girls' final. 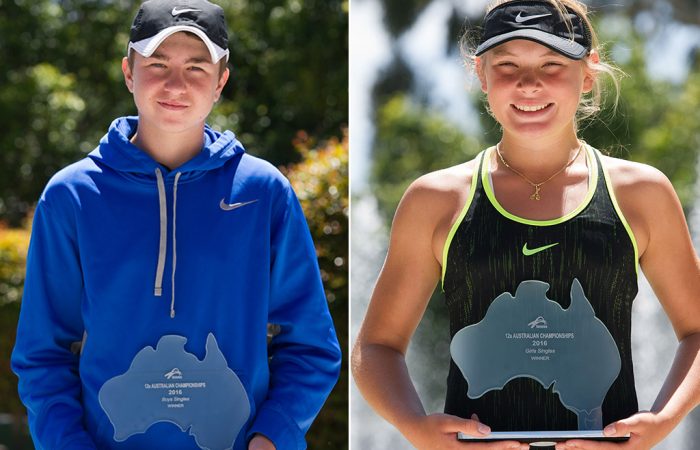 Amor Jasika gave his family the perfect start to a special final day at the 2016 December Showdown, winning the 12/u boys’ title at the Australian Championships ahead of elder brother Omar’s appearance in the Australian Open Play-off final.

The Victoria native, seeded No.6 seed at Melbourne Park this week, beat Japanese wildcard and No.2 seed Lennon Jones 4-6 6-3 7-5 in a rollercoaster contest that passed the two-hour mark.

Jasika, whose one-handed backhand is a rare sight in his age group, towered over the diminutive Jones and looked to fire winners early in the rallies whenever possible.

But Jones has proven to be a fine scrambler, whose sound technique and consistency allowed him to fight fire with fire from the baseline as he grabbed the first set.

Jones snatched a break at the start of the second set but, with brother Omar looking on, Jasika roared back to level the match, only to fall behind once more early in the third set.

He recovered the single break to level up at 4-4 – and promptly handed Jones the chance to serve for the match with a string of errors in the next game.

But Jasika refused to give up. With the pressure on Jones to serve out the match the Australian broke to love, then held to pile more pressure on his opponent, who was time serving to stay in the match at 5-6.

The pressure Jones was feeling told once more, with Jasika winning his third successive game to seal a hard-fought win.

“As you can see Lennon played the best,” Jasika said. “I just chose not to give up and played my best tennis.”

Charlotte Kempenaers-Pocz carried her recent fine form into the final of the girls’ 12/u Australian Championships, where she made light work of No.3 seed Hana Sonton 6-1 6-0.

It was another sterling display from top seed Kempenaers-Pocz who maintained her intensity throughout the match, outgunning and outmanoeuvring the Queenslander to secure her first national title.

“I stayed composed on the tougher points, all the 30-alls and deuces, I tried to stay as positive as I could,” said a beaming Kempenaers-Pocz.

“I went for my shots, and I didn’t play her game. My serve was really good, and I tried to get out of the point early so I didn’t have to run too much and lose my energy.”

The South Australian won the title without dropping a set, despite stern tests from New South Wales’s Mia Repac and Talia Gibson of Western Australia en route to the final.

“Definitely the quarterfinals and semifinals were my toughest matches,” Kempenaers-Pocz admitted. “I learned a lot this week.”