Pearson storms into 18/u boys’ final

Using his throwback style to full effect, Kody Pearson on Friday advanced to the final of the boys' 18/u Australian Championships. 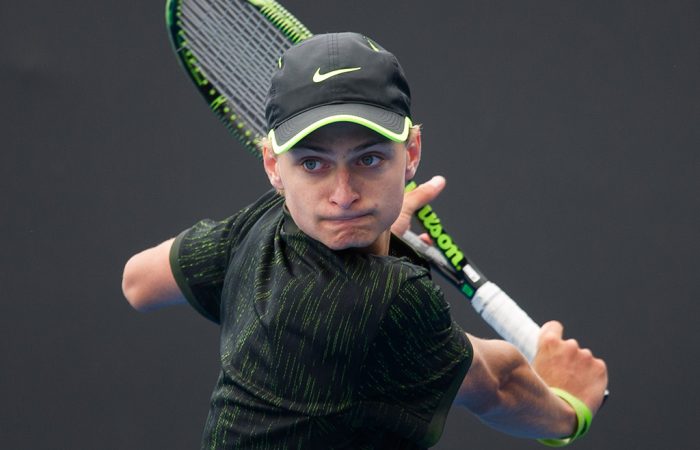 Kody Pearson on Friday defeated the in-form Lucas Vuradin to take his place in the boys’ 18/u Australian Championships final.

There he will meet wildcard Scott Jones, who downed No.5 seed Adam Walton 6-4 6-2 in the other semifinal.

The winner of Saturday’s final will receive a wildcard into the men’s qualifying draw at Australian Open 2017, as well as a place in the 16-player Australian Open Wildcard Play-off field.

“I came here with the goal of making a semi, and I’ve beaten that goal. So (l’m looking to) set a new one and hopefully come away with the championship,” said Pearson after he beat Vuradin 6-1 6-4 at Melbourne Park.

“Scott’s been in college (playing tennis at the University of Tennessee until now), so he’s flown under the radar a bit.”

After storming through the first set, Pearson found Vuradin – who was undefeated in four matches in the 18/u event this week – tougher to handle in the second.

Vuradin built a 4-1 lead before Pearson reeled him in, and the two eventually battled out a thrilling final game.

Pearson unfurled his magnificent one-handed backhand – which he attributes to his tennis-playing family, who all used the same stroke – for a winner to reach 40-0, only for Vuradin to save all three match points.

An ace brought up a fourth, which Vuradin also saved.

But Pearson advanced to the net and landed a winning volley to earn a fifth and after forcing an error from Vuradin, he sealed victory.

“In some of the games that he held early in the second set, I had a few break points early but didn’t stick to my game plan,” Pearson reflected.

“But I backed myself throughout that set and knew it was gonna pay off eventually, which it ended up doing.”