Dylan Alcott hopes his achievements on court - capped with his Newcombe Medal victory - and in the media can help him serve as a role model for younger people with a disability. 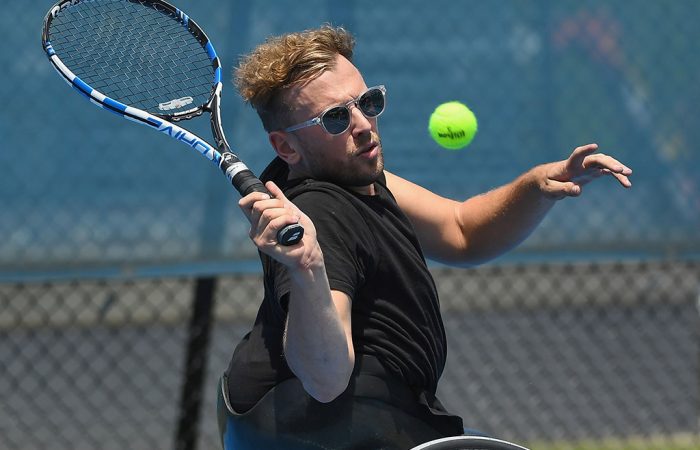 Newcombe Medal winner Dylan Alcott says he hopes his achievements are an inspiration to a new generation of disabled children.

Alcott, 25, said he was bullied when he was growing up and didn’t feel like he had any disabled role models.

He said his win, over able-bodied elite players such as Sam Stosur, was “powerful stuff”.

As well as his tennis accolades, Alcott wanted to increase his blossoming media profile after recently landing a new position as a weekend presenter with Triple J.

“If I could have turned the TV or radio on at school when I was getting bullied at school and seen someone like me it would have made a difference because I would have had a positive role model,” Alcott said.

“I want to be a beacon of hope for kids with disabilities or people who have had car accidents and think their life’s over because they can’t walk, it’s not true.

“You can still play sport, travel the world, have a girlfriend – do the things I’ve done. I want more people to have that opportunity.”

Alcott planned to play Australian Open 2017, where he will be gunning for his third straight title, and said he would then temporarily wind back his tennis to focus on his media career.

He planned to defend his Paralympic titles in Tokyo in 2020 but before then, wanted to be known for more than his impairment.

“I don’t want to just to be talking about my disability, I want to interview Roger Federer or Nick Kyrgios or the Red Hot Chili Peppers.

“The world is my oyster now.”

While Alcott aspired to reach the same heights on the court as his medal namesake John Newcombe, he also liked his off-court public persona.

“Newk’s such a legend, not only on the tennis court but I love his personality in the media,” Alcott said.

“I love his personality and he’s been a big influence in how he’s carried himself – he’s a bit of a larrikin and I guess I am too.”