Paralympics: Alcott through to quads semis

Dylan Alcott continued his march to Paralympic gold in Rio after wins in singles and in doubles with Aussie partner Heath Davidson. 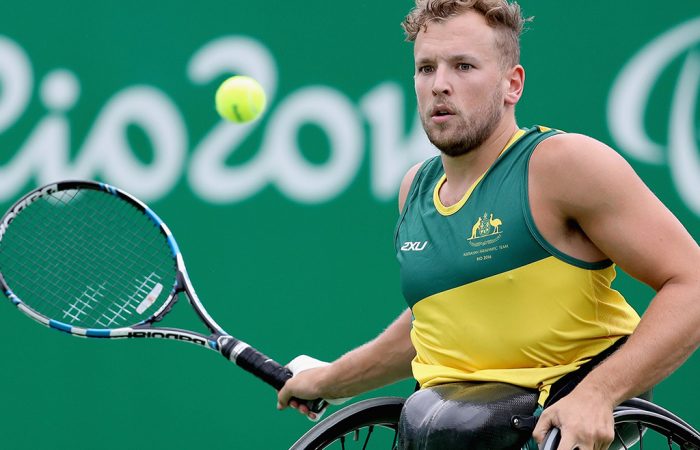 Australian Paralympian Dylan Alcott has a vocal cheer squad supporting him in Rio, and you can find them if you follow the off-key but passionate strains of Waltzing Matilda and I Still Call Australia Home echoing through the tennis centre.

The wheelchair tennis player says 24 of his friends and family have come to watch him strive to win Paralympic gold in two sports, after he switched from wheelchair basketball.

“They’ve all got matching tracksuits with my face on it.”

Buoyed by the support in the stands, the world No.1 has breezed through his quarterfinal match on Saturday with a straight-sets win over American Nicholas Taylor.

He then backed up alongside doubles partner Heath Davidson to steamroll through the first set of their quarterfinal against Japan’s Shota Kawano and Mitsuteru Moroishi, winning 6-1 in 30 minutes.

Alcott took the reins on court, booming instructions to his less experienced partner, who was happy to oblige.

“He’s the boss out there, he’s No.1 in the world, I follow his lead, and that works,” Davidson said.

The duo made a good start to the second set taking a 5-2 lead, but the Japanese team refused to go away and won the next two games.

The reigning World Team Cup champions snapped back to their best, to close it out 6-1 6-4, and the good friends made their way into the semifinals.

“I love playing with him,” said Davidson.

“It’s just like having a hit on a Saturday afternoon with a mate, but just a bit different because it’s at the Paralympics.”

A place in the gold medal match will be up for grabs when they face Great Britain’s Andy Lapthorne and Jamie Burdekin next.

Alcott has a tough match-up looming in the singles semifinals against South African world No.3 Lucas Sithole, while Davidson fell in the singles quarterfinals to Lapthorne.

Meanwhile, Sarah Calati was ousted in the opening round of the women’s singles.

“We put everything in the final set and fought for every point,” said Kruszelnicki after the two-hour, 43-minute epic.

“It was very tough because the Australian guys have played many years together and practised together and they are a very good team.

“We have played together not so long and haven’t practised as much. For Kamil and I it is our first win against a very good team, so we are very happy.”