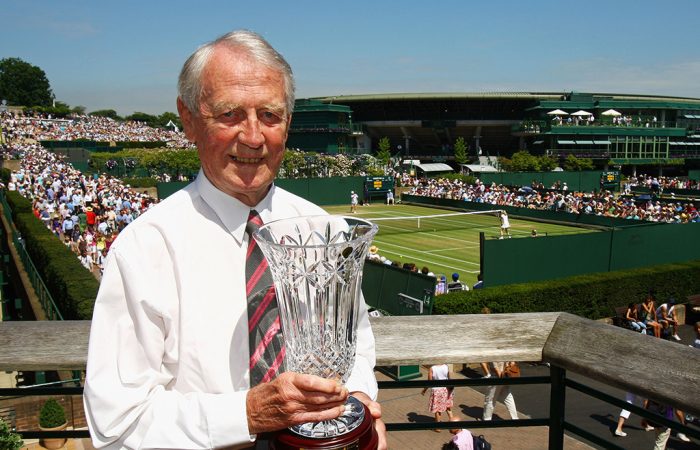 Melbourne writer Alan Trengove – once regarded as the ‘The White Knight’ of journalism after his compassion and fascination for ‘the drama of human affairs’ – died in Melbourne on Thursday night aged 87.

Best known for his coverage of sports, in particular tennis, Trengove was the founder of Australian Tennis Magazine and the author of 16 non-fiction books including half a dozen about tennis, most notably The Story of Australia and the Davis Cup and The Art of Tennis.

He met them all with a sense of curiosity, open-mindedness and balance, penning stories, reports and opinion on weighty topics from the effects of apartheid on sport and the Cuban missile crisis to the 1964 Test tour of England and Arnold Palmer’s two British Open triumphs. He wrote with a lucid, direct style, sparkling with wit and wisdom, always thoroughly researched and polished.

Born in Fulham, London on 1 July 1929 to an Australian cobbler, William, and a charlady, Nell, Trengove was a World War II evacuee, boarding with a family at Guildford in the Surrey countryside from the age of 10 to 16.

This period sparked his interest in journalism, reading accounts of the war from foreign correspondents in the Daily Express. Despite a self-proclaimed bashfulness and introversion that he feared might engulf him in the hurly burly of Fleet Street, Trengove persisted with his passion and secured his first job as a copy boy at Reuters News Agency, quickly followed by a position with the local 12-page tabloid Fulham Gazette. He was 16 and writing everything from police court cases, inquests, murders, weddings, local government affairs, theatre reviews and sports.

Trengove was captivated by Australian sports stars and used his press pass to attend as many events as he could. Acutely aware of his Australian roots and less content about his native land in post-war England with its all pervading class consciousness and scarcity of sporting facilities, Trengove persuaded his working class parents to return to Melbourne.

Following a casual stint on The Age newspaper, Trengove was advised to sharpen his knowledge of Australian life and – with the help of a persistent aunty in Wagga Wagga – he secured work on a daily newspaper and trained as a professional athlete. He didn’t win many track races but half a century later carried the Olympic torch in Seymour ahead of the Sydney Games.

Trengove met his soul mate Joan in Wagga, the pair marrying and moving to Melbourne where he obtained a city job with the Australian Broadcasting Commission as a D-grade reporter writing copy for newsreaders. This was ultimately unfulfilling but in 1953 he seized a rare chance to establish a career as a sports writer on the The Argus, the oldest of Melbourne’s three morning papers.

‘Melbourne was a good place to be a sports writer,’ he wrote in his autobiography, Saints and Sinners (And How They Made Me).“No other city of comparable size had produced so many world champions in such a variety of sports, or so consistently attracted such large crowds to sporting venues.”

The major ingredient for all sports writers, he said, was ‘energy and enthusiasm.’ Add to this, ‘a facility to convey the drama, petty disasters and triumphs of sport, a flair for the colourful phrase, and a resilient liver.’

He cautioned against an obsession for statistics, and heralded boldness and certainty. These traits made Trengove, not only the leading sports writer of his time, but also a notable features writer.  Within three years of arriving in Australia, he was writing on tennis and golf, ‘with all the assurance of one who had invented both games.’

In July 1955, Trengove was head-hunted by the Sun News-Pictorial, Australia’s first tabloid. He stayed for 20 years and spent three years as the Herald group’s London correspondent in the early 60s.

Trengove was immersed in tennis, covering Davis Cups, and major championships during the heyday of the sport in Australia, mingling with and reporting the feats of Lew Hoad, Ken Rosewall, Frank Sedgman, Rod Laver, John Newcombe and a dynasty of greats caught up in the split between amateur and professional ranks. He never wasted an opportunity to criticise those responsible for the division in tennis and covered more than 130 Grand Slam tennis tournaments from 1953 to 2010.

Along with sport and forever entwined with tennis, he branched into specialist feature writing, producing stories on any topic and earning a reputation as a journalist championing a good cause, hence the moniker: The White Knight.

Raising his young family in Clayton, he was a close neighbour to the exceptional middle distance runner Herb Elliot and in 1961 published the first of many sports books, The Golden Mile, timed for the Rome Olympics where Elliott won the 1500 gold medal in record time.

Over the next 50 years Trengove wrote books on a variety of subjects: John Grey Gorton, a biography of the Liberal Prime Minister, What’s Good For Australia …! The story of BHP; Menzies, A Pictorial Biography, and cricketer Keith Stackpole’s autobiography Not Just For Openers among them.

“He always had a book on the go,” remembers wife Joan, who proof-read every single one and provided on-going editorial support when Trengove launched Australia’s first tennis magazine in 1976.

Trengove continued to seek new writing challenges throughout his life, including forays into television comedy and film, and a comic strip with cartoonist George Haddon titled, Wonders of Wildlife. He freelanced for The Bulletin, Sydney Morning Herald, New York Times, the Canberra Times and the Independent in England.

Alan was awarded the Association of Tennis Professional’s Ron Bookman Award for Media Excellence in 2008, presented at Wimbledon by the late executive chairman and president Brad Drewett. He was inducted into the Sport Australia Hall of Fame in 1990 and recognised for his contribution to the sport of tennis at the 2005 Australian Sports Commission Media Awards.

After a long illness, Alan died surrounded by his close-knit family. He is survived by wife Joan, children Chris, Deborah and Kim, and his seven grandchildren, Eleanor, Megan, Laura, Anna, Jessy, Bede and Nathaniel.