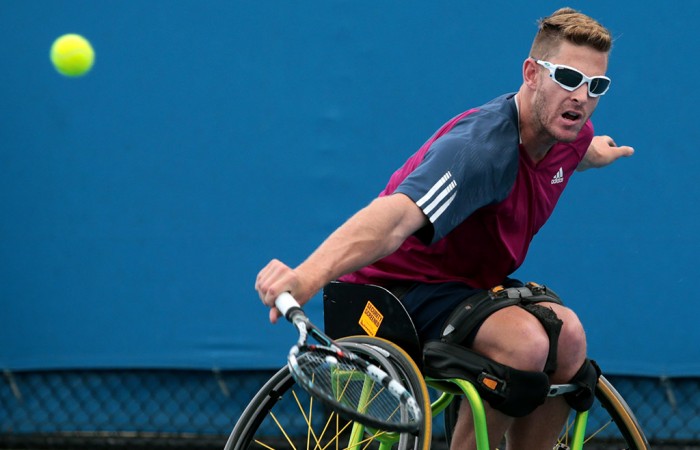 Five Aussies will take to the courts in singles competition at the Rio 2016 Paralympic Tennis Event.

Adam Kellerman and Ben Weekes will fly the Australian flag in the men’s singles tournament, with Kellerman, seeded 12th, receiving a first round bye.

In the second round he’ll play the winner of the match between Japan’s Satoshi Saida and Adam Berdichevsky of Israel.

Weekes opens against Spaniard Francesc Tur, with the winner progressing to a second-round stoush with Stefan Olsson, the seventh seed from Sweden.

Kellerman and Weekes will team up in men’s doubles and face Polish duo Kamil Fabisiak and Tadeusz Kruszelnicki.

In the women’s singles, Sarah Calati is Australia’s sole representative; the Victorian takes on China’s Zhu Zhenzhen in the first round.

She’s landed in a quarter of the draw headed by seeds Aniek Van Koot (No.4) and Kgothatso Montjane (No.8), of the Netherlands and South Africa respectively.

Australia’s Dylan Alcott heads the quads draw as the tournament’s No.1 seed.

Alcott opens against Israel’s Shraga Weinberg and could face No.3 seeded rival Lucas Sithole in the semifinals, should the seedings hold.

Another Aussie, Heath Davidson, faces Bryan Barten of the United States in his first-round match and should he advance faces a likely quarterfinal battle against fourth-seeded Brit Andy Lapthorne.

Alcott and Davidson will pair up in the eight-team quads doubles event; they have drawn the Japanese pairing Shota Kawano and Mitsuteru Moroishi.

The Paralympic Tennis Event begins on Friday 9 September in Rio.