In a match of momentum swings and torrid points, Bernard Tomic ultimately fell 10-8 in the fifth set to French 32nd seed Lucas Pouille. 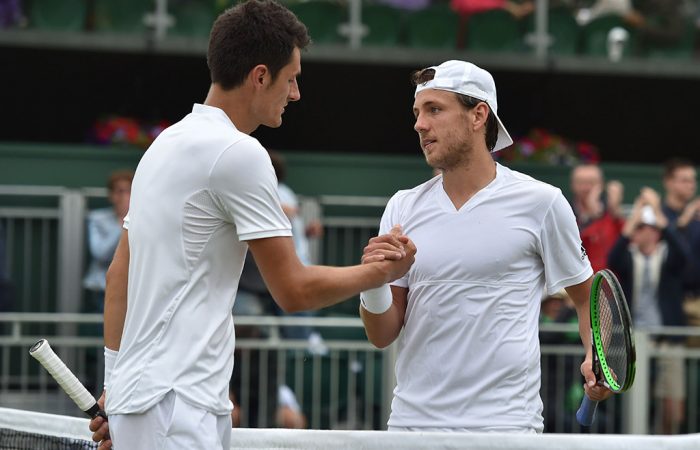 Bernard Tomic has exited Wimbledon after blowing a handy fifth-set advantage in a heartbreaking fourth-round loss to Frenchman Lucas Pouille.

The world No.30 is guaranteed to play a Czech in his maiden Grand Slam quarterfinal – either 2010 runner-up and world No.10 Tomas Berdych or the unseeded Jiri Veseley.

“It was a tough moment, and I think it was great to be a part of that match.

“But I felt like I should have won, had the match on my racquet and he just kept playing freely and going for his shots.

“He did the right things to win the match. Full credit to him.”

After waiting through a 90-minute rain delay with the score locked up at one set all, Tomic appeared to be on track for his second quarterfinal appearance at the All England Club.

But after allowing the Frenchman back on level terms and then staving off six break points in the deciding set, Tomic was unable to convert a hard-earned 4-2 lead.

Seeded 19th, Tomic made a confident enough start in his bid to match his run to the last eight as a teenage qualifier in 2011.

He broke Pouille for a 3-1 lead, only to lose four of the next five games to surrender the first set.

Pouille sought treatment for a right foot injury at 3-2 in the second set and the lengthy break allowed Tomic to regain his attacking mindset.

Stepping up the aggression, he rifled a backhand past the advancing Frenchman to gain a break for 4-3.

He served out the set with his 12th ace to draw back on level terms before the heavens opened and forced players off court.

Tomic saved four break points in the sixth game of the third set upon the resumption and was rewarded for his resilience with a crucial break of his own the very next game.

He consolidated to seize a two-sets-to-one lead, only to take his foot off the pedal and allow Pouille to force a deciding set.

In growing trouble, Tomic showed true grit to hold from love-40 and 15-40 in his first two service games in the fifth. He also faced a break point at 2-2 but once again held firm.

Refusing to go away, though, Pouille rallied from 4-2 down to eventually deny Tomic in just under three hours of stop-start action.

“I felt whoever won the match against us has a chance to play for a semifinal in a Grand Slam. It’s a mistake that I made,” Tomic said.

“I played so many times in my career fourth rounds, third rounds in Grand Slams, and only been to the quarters once. I felt like this was a big opportunity for me.

Tomic said that he would look to rest and recharge following a “tough two, three months for me on tour” before looking to prepare for the US hardcourt season.

The Queenslander plans to contest events in Washington DC, Toronto, Los Cabos and Cincinnati prior to the US Open.