Kyrgios no match for Murray at Wimbledon

Nick Kyrgios' Wimbledon campaign came to an end on Monday at the hands of a ruthless Andy Murray on Centre Court. 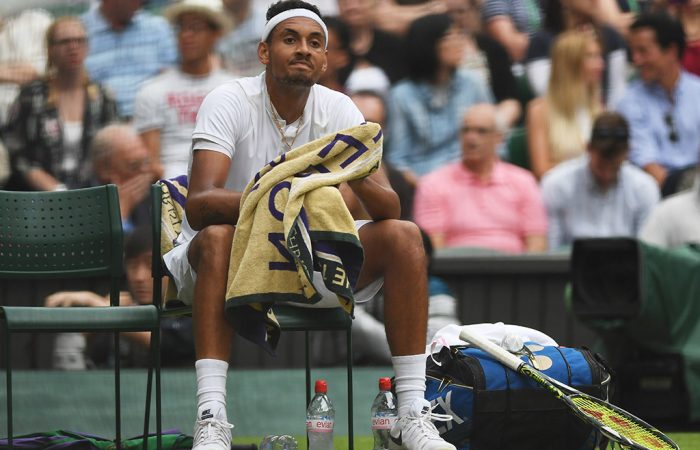 Andy Murray has dealt Nick Kyrgios another Grand Slam defeat to send the Australian No.1 packing from Wimbledon in straight sets.

Britain’s title favourite was in a ruthless mood as he dispatched Kyrgios 7-5 6-1 6-4 in one hour and 43 minutes to end Australia’s interest in the singles for 2016.

Bernard Tomic earlier suffered a heartbreaking 6-4 4-6 3-6 6-4 10-8 loss to Frenchman Lucas Pouille as Australia’s hopes came to an end in the fourth round.

Murray’s victory completed a Grand Slam sweep of wins over Kyrgios after he also removed the Canberran from last year’s Australian, French and US Open draws.

“I was really comfortable out there the first set. I thought I was playing some really good tennis. I believed that I could win the match. As soon as I lost the first set, I just lost belief,” Kyrgios lamented.

“Obviously felt like a mountain to climb after losing the first. He played pretty well, as well. I don’t think he missed too many balls either.”

There was no telling the match would be a straight-sets affair as the pair played cat and mouse for much of the first set; neither was able to make any inroads on their opponent’s serve.

Out of the blue, though, Murray conjured three set points after luring Kyrgios to the net and cracking a scorching backhand crosscourt winner to have the Australian down 5-6 and love-40.

Kyrgios saved two of the set points with monster serves, but surrendered the set with a forehand volley into the net.

The miss proved the beginning of the end for Kyrgios; the Australian fell 15-40 behind with backhand errors serving at 1-2 in the second set.

Murray again goaded Kyrgios’ forehand to induce a backhand volley error from his challenger to break for 3-1.

He then raced through the set to take a stranglehold on the match.