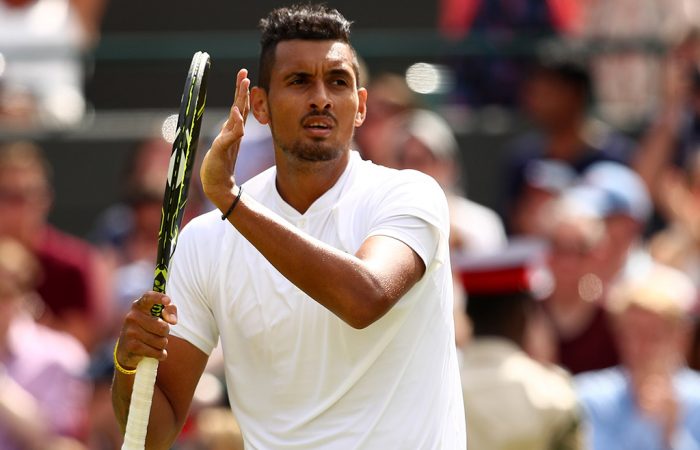 Nick Kyrgios has seen off three-time quarterfinalist Feliciano Lopez to set up a fourth-round Wimbledon blockbuster with Andy Murray.

Kyrgios returned to the All England Club on so-called People’s Sunday to complete a lively 6-3 6-7(2) 6-3 6-4 victory over the Spaniard to give Australia two men in the last 16 for the first time in 12 years.

“My attitude was great, good today. Very, very happy with the way I played,” Kyrgios said.

“Now I’m pretty much playing the ultimate player on grass at the moment. It’s been a tough draw but, at the same time, I’m taking it one match at a time.

“I definitely have the tools to do it, but he’s one of the best in the world and probably the favourite to win it.”

Bernard Tomic was already safely into the second week after surging to a 6-2 6-4 6-4 win over 14th seed Roberto Bautista-Agut on Saturday.

The 21-year-old was forced to battle through two tight sets before darkness stopped play on Saturday night with the scores locked at a set apiece.

But the 15th seed was all business on Sunday, his supreme level of control and shot-making instead driving Lopez to constantly berate his box in exasperation.

Kyrgios pressed hard to secure a vital break in the eighth game before serving out the pivotal third set and celebrating with an energetic double fist pump.

He treated fans to the fastest serve seen on court one all championships – a 219kph thunderbolt – and then produced a magical backhand crosscourt pass to break the 22nd seed again for 2-1 in the fourth set.

Serving bombs and finding ridiculous angles on his groundstrokes, Kyrgios remained a study in concentration until closing out the weather-delayed encounter after two hours and 42 minutes.

Murray now stands between Kyrgios and a second quarterfinal appearance in two years after the second-seeded home hope and 2013 champion ended the run of fellow Australian John Millman in straight sets on Saturday.

But with Tomic up against Frenchman Lucas Pouille on Monday, Australia will have two men playing for spots in the quarterfinals for the first time since Lleyton Hewitt and Mark Philippoussis in 2004.

Suddenly, Kyrgios and Tomic are two wins away from an all-Australian semi-final.

The winner of the Kyrgios-Murray showdown will meet either seventh seed Richard Gasquet or fellow former semifinalist Jo-Wilfried Tsonga.

If Tomic can get past Pouille, the 19th seed will likely confront world former finalist and world No.10 Tomas Berdych in the quarterfinals.