Lleyton Hewitt believes Nick Kyrgios and Bernard Tomic must use all their attacking instincts and firepower if the seeded Aussie duo are to march on further at Wimbledon. 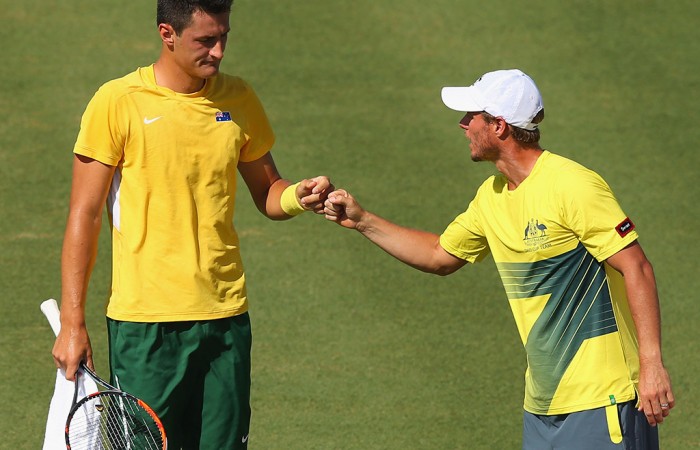 Lleyton Hewitt wants Nick Kyrgios and Bernard Tomic to go out swinging as the pair strive to set up an improbable all-Australian semifinal at Wimbledon.

Tomic will face Lucas Pouille in the fourth round on Monday before Kyrgios takes centre stage against second-seeded 2013 champion Andy Murray.

Seeded 19th, Tomic is favoured to beat the 30th-ranked Pouille and move into his second quarterfinal at the All England Club, having gatecrashed the last eight in 2011 as a teenage qualifier.

But a wary Tomic admitted he didn’t know much about the Frenchman, who ended the run of former US Open champion Juan Martin del Potro in the third round.

“I have to assess and sit down with Lleyton and the team and discuss what the best situation is to play him,” Tomic said.

The Davis Cup captain said Tomic must carry the same attacking mindset into the match that he used to crush world No.15 Roberto Bautista-Agut on Saturday.

“To win the big matches against better players he’s got to take that step,” said Hewitt, the 2002 Wimbledon champion.

“Bautista Agut, you’ve got to beat him. To beat him in straight sets in a slam isn’t easy. That was a really promising win.”

Hewitt has also been mentoring Kyrgios at the slams and also wants Australia’s 15th seed to take the fight to Murray and play the match on his terms.

“Nick will have to use all his weapons and firepower,” he said.

“But Andy nearly against anyone backs himself when it gets into a physical battle, especially over five sets.

“I’m sure he’ll try and do that again. How many balls Andy can keep getting back – that’s the biggest thing, trying to make Nick play that extra shot.

“But Nick, on his day, can match it and hit guys off the court. It will be a good match.”

Australia has two men in the fourth round for the first time since Hewitt and Mark Philippoussis made it this far in 2004.

Further victories for Kyrgios and Tomic would edge them to within one win each of clashing on Wednesday for a spot in the final.

The winner of the Kyrgios-Murray showdown will meet either seventh seed Richard Gasquet or his French countryman and fellow former semi-finalist Jo-Wilfried Tsonga.

If Tomic can get past Pouille, the 19th seed is guaranteed a Czech quarterfinal opponent – either 2010 runner-up and world No.10 Tomas Berdych or the unseeded Jiri Veseley.