A businesslike performance by Bernard Tomic has seen the Aussie dismiss 14th seed Roberto Bautista Agut to reach the fourth round at Wimbledon. 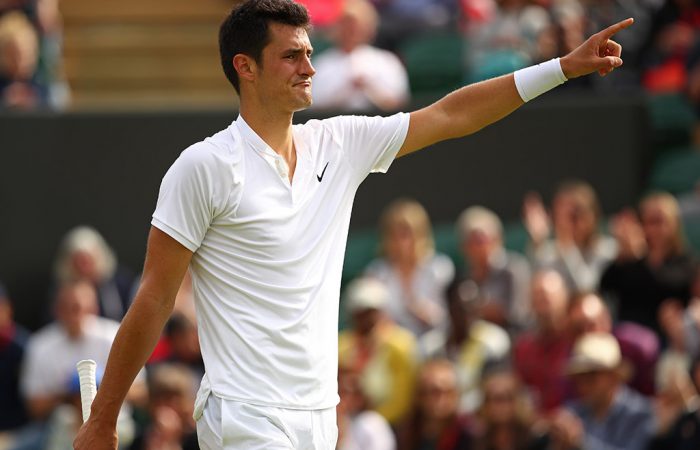 Bernard Tomic has stormed into the second week of Wimbledon with a scintillating straight-sets win over 14th seed Roberto Bautista Agut.

Showing no signs of fatigue from his gruelling second-round win over Moldovan qualifier Radu Albot, Tomic swept past Bautista Agut 6-2 6-4 6-4 in less than two hours to reach the last 16 at the All England Club for a third time.

Australia’s 19th seed next faces either former US Open champion Juan Martin del Potro or Frenchman Lucas Pouille on Monday for a spot in the quarterfinals.

He should be full of confidence of at least matching his 2011 run to the final eight after dominating the world No.15 with an excellent serving display and bossing the Spaniard from the baseline.

“I felt pretty good. I had to play that way. Otherwise I would have played a long match, and it’s something I didn’t want to do,” Tomic said.

“So I needed to play like this. That was, from the start, in my mindset.

Tomic struck nine aces, held all 14 of his service games after saving five break points and only coughed up one double-fault in his most poised display of the championships.

He also had Bautista Agut under pressure from the back court throughout.

Moving the Spaniard from side to side and throwing in a series of deft drop shots to unsettle his higher-ranked rival, Tomic broke Bautista Agut four times and wrapped up victory after just one hour and 48 minutes.

His only disappointment was that his mentor, Australian Davis Cup captain Lleyton Hewitt, missed his sublime display while eking out an epic first-round doubles win with Jordan Thompson.

“It’s a shame Lleyton couldn’t watch. He would have loved to be there to watch because I was on fire,” he said.

“I knew I couldn’t match with him off the ground. I couldn’t compete because I’ve been a little bit tired. I played a lot of matches.

“So I knew my game had to be attack from the start, focus on my serve.”