Matt Barton's dream Wimbledon campaign has continued with an epic and emotional victory over fellow qualifier Albano Olivetti in the first round. 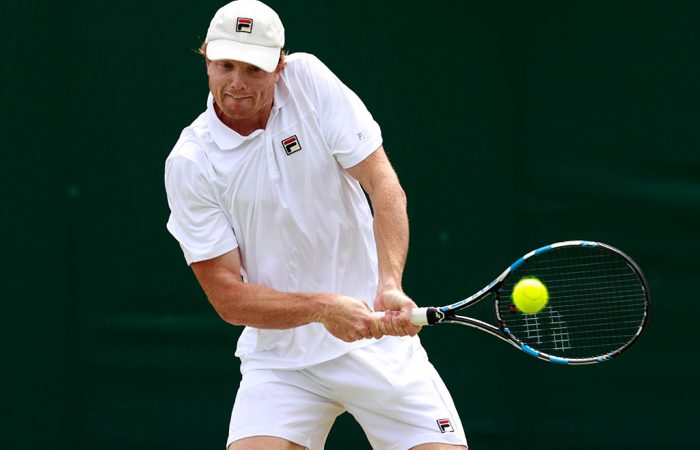 Matt Barton added a new chapter to his fairytale Wimbledon debut with the most momentous victory of his career carrying him into the second round.

The epic victory – his first in the main draw at a Grand Slam tournament – set up a clash with American 18th seed John Isner on Friday and earned Barton a guaranteed pay day of £50,000 ($A90,500) and provisionally lifts the 24-year-old to a career-high ranking of No.187 in the world.

“That was ridiculous. I can’t believe it. I’m still shocked by the win,” Barton said.

Barton’s status as the tournament’s biggest underdog may have been stolen by world No.772 Marcus Willis, who captivated the Wimbledon crowds in losing to Roger Federer on Centre Court on Wednesday.

But his victory remains one of extreme perseverance for the world No.246, having briefly retired from the professional circuit to take up a personal coaching role after being sidelined with Osgood-Schlatter disease in his knee.

While Barton initially feared the retirement could be permanent, it proved the catalyst for his career revival.

The break freshened him up and convinced him to get back on tour but torn ligaments in his ankle, which ensured a further seven-month injury layoff, was another hurdle.

It all came to a head, in front of his parents, girlfriend and cousin in Court 10, as he took victory via a double fault – Olivetti’s 17th of the match – and collapsed face first on the famous Wimbledon grass, overcome with relief.

“I didn’t know what to do. I’ve never been in a situation like that. I was just relieved and couldn’t believe it,” he said of the emotional reaction.

“It was a great feeling for me. I’m stoked. Can’t believe it.”

And in keeping with his career arc, Barton did it the hard way.

He squandered three match points, blowing six break points in the fourth set, before finally closing out the win.

Barton and Olivetti slugged it out for a monster 85-minute fifth set which started on Wednesday night and finished Thursday afternoon as both proved nigh-on impossible to break.

Olivetti, credited with having the second-fastest serve in history at 257.5kmh, sent down 56 thundering aces to Barton’s 33.

But crucially the Australian had just nine double-faults, offered only one break point – which he saved – and had 105 unreturned serves compared to Olivetti’s 99.

Barton believes facing Olivetti is the perfect preparation for the monster serves set to be delivered by the 2.08-metre Isner.