Matt Barton says facing the big-serving Albano Olivetti in round one was prefect preparation for tackling John Isner on Day 5, while Nick Kyrgios takes on fellow excitement-machine Dustin Brown. 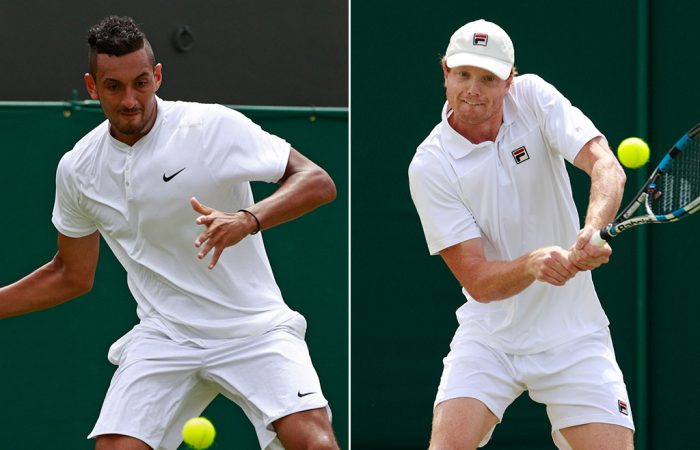 Barton secured a memorable maiden Grand Slam win when he prevailed in over four hours – spread across three days due to rain delays – to book a second-round clash with the 208cm-tall Isner on Friday.

Isner is famed for his enormous serve – having hit a record 113 aces in defeating Nicholas Mahut at Wimbledon in 2010 – but in toppling Olivetti, Barton took out the second-biggest server in history.

The towering Frenchman’s fastest serve has been clocked at 257.5km/h, second only to Australian Sam Groth.

“I couldn’t ask for better preparation. I know what to expect now,” Barton said.

“I’ve faced a player who is going to play like Isner. I’m looking forward to the challenge next round.”

Former Davis Cup captain Wally Masur said that while 18th seed Isner is a superior player to Olivetti, he expected Barton would take confidence from being thrown into a similar match-up.

“Isner is a bit more polished but obviously the serve will be not dissimilar, coming down from a greater height,” Masur told AAP.

Masur, who has acted as a coach and mentor to his 24-year-old northern beaches neighbour, said he was proud of the youngster’s fighting spirit and perseverance to get back on the professional circuit after briefly giving the game away due to knee injuries.

And he was delighted with Thursday’s victory, taking particular interest in Barton’s mental strength despite being unable to capitalise on 11 break points throughout the match.

“Even when he wasn’t converting, his body language never changed,” Masur added.

“It’s pretty frustrating against a big server like that because you think ‘I’m not going to get many chances’ and if you don’t take them you can beat yourself up a little bit.

Isner is familiar with Barton’s weapons, and noted he’d come across the affable Australian several times this year.

“He seems to be a super nice guy and I know he’s got a big game, a big serve and I believe a big forehand that translates pretty well to grass,” Isner said.

“It’s going to be a very tough match for me.”