Despite being a top 20 seed, Bernard Tomic is wary of the first-round threat of unseeded Fernando Verdasco as he prepares to embark on his eighth Wimbledon campaign. 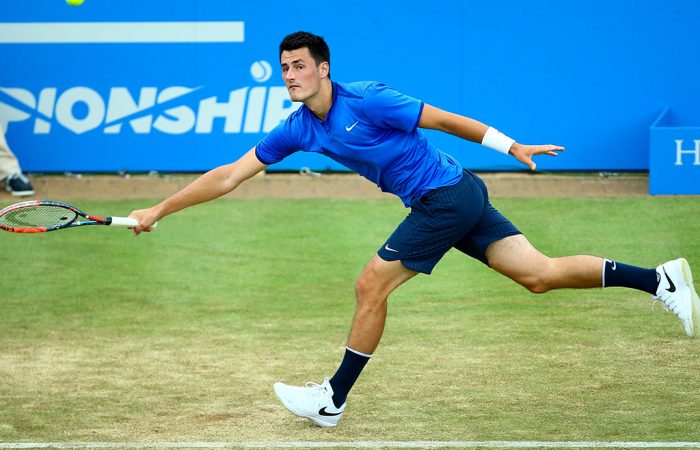 Bernard Tomic will draw on cherished memories of his career-best Grand Slam run as he fights to negotiate a devilish first-round Wimbledon draw.

Tomic squares off with big-serving Spaniard Fernando Verdasco and, like just about every other Australian in the singles draws, knows he could have fared better.

“There’re about six to eight (unseeded) players you don’t want to face first round and he’s one of them,” Tomic said.

Verdasco proved just how dangerous only last week when he sent dual major champion Stan Wawrinka crashing out at the Queen’s lead-up event.

Even after ending Verdasco’s run in the next round to chalk up his fourth straight win over the one-time Australian Open semifinalist, Tomic remains on guard.

“He knows he hasn’t beaten me the past few times and he’s going to go out there and swing hard, go for a few more risks,” Australia’s 19th seed said.

“That’s going to give me more pressure on my service game and I just have to be ready.”

Despite his concern, Tomic is hoping to capitalise on any small openings in the draw and the 2011 Wimbledon quarterfinalist isn’t ruling out another second-week charge.

“Coming back here after the (hip) surgeries, even then playing against tough opponents, it makes me feel good, especially this year,” he said.

“I’m a high seed and I can do some damage. Hopefully I can win my first-round match and after that I can take advantage of the draw.”

The 23-year-old is projected to run into 14th seed Roberto Bautista Agut, who opens against fellow Australian Jordan Thompson, in round three, while Wawrinka could be awaiting Tomic in the last 16.

Like Tomic and Thompson, Nick Kyrgios opens his campaign on Tuesday against crafty Czech Radek Stepanek.

Kyrgios is a hot favourite to progress, but Stepanek is sure to try and unsettle the temperamental 15th seed in what looms as an early test of his title credentials.

The Australian No.1 rounded out his Wimbledon preparations on Friday with a 6-3 7-6(13) victory over exciting German teenager Alexander Zverev at The Boodles exhibition event.

“I feel like I play my best tennis when I’m a bit relaxed out there,” Kyrgios said.

“And obviously when I get to play a good friend like Alex, he’s one of the up and comers, he’s top 25 in the world and he’s playing unbelievable tennis at the moment, so that was a lot of fun out there today.

“We probably played for almost two hours in total, so that’s perfect for me and I feel my matches over the past couple of days have helped me a lot.”