Kyrgios among the Wimbledon contenders

Nick Kyrgios considers himself among a batch of contenders hoping to cash in on any surprise slip-up from dominant world No.1 Novak Djokovic. 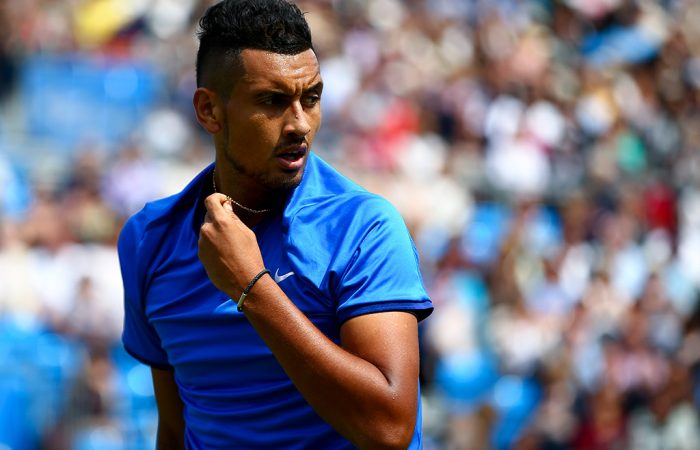 Nick Kyrgios has declared Wimbledon wide open – if Novak Djokovic bombs out, that is.

Kyrgios, who launches his title bid on Tuesday against Radek Stepanek, considers himself among a batch of contenders hoping to cash in on any surprise slip-up from Djokovic.

Djokovic is striving to become the first man in 78 years to win five successive Grand Slam titles and Kyrgios on Saturday acknowledged the all-conquering world No.1 as the obvious favourite.

But Australia’s brightest prospect says Kevin Anderson’s effort to have Djokovic on the ropes last year should give the Serb’s challengers hope.

“I feel there are a lot of title contenders,” said Kyrgios, the 15th seed.

“Say Djokovic loses in the fourth round, I don’t know; he was down two sets to love against Anderson last year.

“If something like that happens, there’s plenty of people who can have their eye on the trophy this year.

“There’s so many players at the moment that can make deep runs. (David) Goffin, (Dominic) Thiem. Especially on grass as well, there’s so many guys that can serve big, play big.

“If the stars align, they can do well.”

Kyrgios could strike Andy Murray in a fourth-round blockbuster, but the 2014 quarterfinalist says it’d be dangerous to look beyond Stepanek, the cunning Czech who led Murray by two sets to love at the French Open.

“To play Stepanek, obviously, is pretty tough,” he said.

“I’m really good mates with him as well. To be honest, he was offering to help me a little bit, he’s getting towards the end of his career.

“He’s still playing some great tennis. I feel like grass is his best surface.

“I’m not looking too far ahead. I know the Kyrgios-Murray fourth round (prospect) is, like, pretty exciting, but I’ve got some tough matches ahead.”