Despite drawing a tough opening-round assignment against No.6 seed Kei Nishikori, Sam Groth believed Wimbledon represents his best chance at an upset victory. 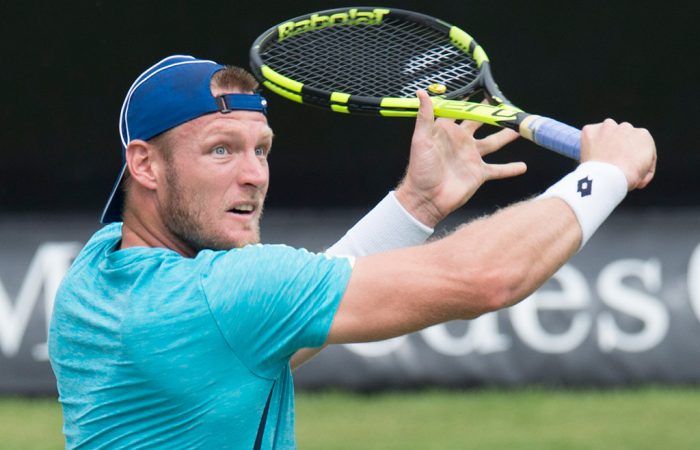 Sam Groth is not talking like a tennis player down on confidence and bang out of luck.

Groth has every right to be kicking stones after arriving at Wimbledon under pressure to arrest an alarming rankings slide and then drawing sixth seed Kei Nishikori in the first round.

And all this after striking claycourt colossus Rafael Nadal first up at Roland Garros this month and running into 10-time major finalist and former Wimbledon champion Andy Murray in round two at the Australian Open.

Awarded the Newcombe Medal last year for outstanding results, Groth admits he’s “dirty with the draw gods”, but nevertheless remains upbeat about another strong campaign following his charge to the Wimbledon third round in 2015.

“If I was ever going to cause an upset at a slam, I feel like this is the one,” Groth said ahead of his showdown on Monday with Japan’s 2014 US Open runner-up.

“I took a set off Roger (Federer) here last year and was the only guy to do so before the final, so it’s a place I feel comfortable playing.

“It’s a surface that probably suits my game better than any other. I probably wish I was playing 20 years ago when every tournament was on this surface.

“So this is the place for me to do it and why not do it come Monday.”

Groth lost his only previous meeting with Nishikori, on a US hard court last year, and knows he’ll have his work cut out reversing the result.

But the owner of the world’s fastest-ever recorded serve knows it’s very much possible.

“Especially when it’s green in the first few days when it’s not easy to return,” he said.

“We’ve seen a lot of upsets here in the last few years. I’m sure there’re guys who didn’t want to see me as well in that part of the draw coming onto this stuff.”

The cause of Groth’s optimism, despite slumping to No.123 in the world after leaving Wimbledon last year believing he’d return as a contender, is simple enough.

“I don’t feel like I’ve been playing too badly.” he said.

“I’ve just lost a lot of tight matches against quality players, so I haven’t been able to build any match momentum.”