An emotional Matt Barton has reached the main draw of Wimbledon after knocking off top seed Karen Khachanov in the final round of qualifying on Friday. 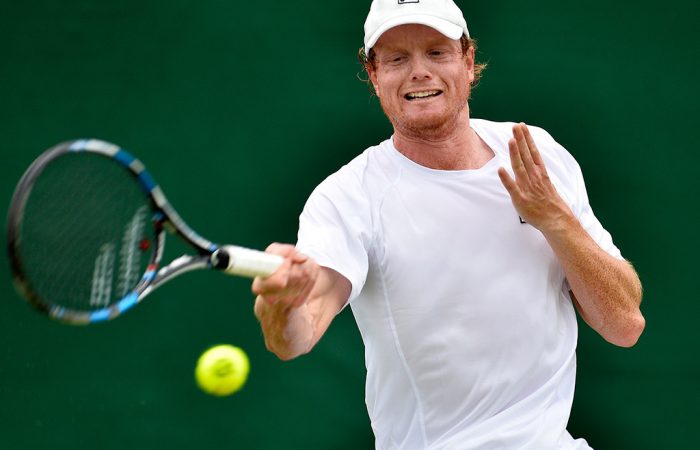 An unreturnable serve sealed the match – and Matt Barton’s progression through to the main draw at Wimbledon.

The Australian produced a stellar performance to knock off No.1 seed Karen Khachanov 7-6(1) 6-7(1) 6-2 6-3 on Friday in the final round of qualifying, a result which sent him through to the main draw of a Grand Slam for the first time in his career.

Barton only just scraped in to the qualifying event at Roehampton – he was the last direct acceptance into the draw just minutes before the entry deadline closed.

And on Friday he was across the net from one of the tournament’s most highly-rated players, ranked 150 places higher than Barton as well as being one of the faces of the ATP’s #NextGen campaign.

Having never played an officially-sanctioned five-set match, nor having advanced this far previously in a major qualifying tournament, the New South Welshman nonetheless rose to the occasion to achieve the biggest result of his career.

“I just can’t believe I won. It’s a pretty amazing achievement for me, against the No.1 seed. I didn’t expect to win, so yeah, over the moon,” said Barton, who broke down in tears after the win.

“Never (been to the All England Club). So it’s going to be first time ever. That was my first five-setter. It’s gonna be my first (Grand Slam) main draw. It’s pretty emotional.”

The match, originally scheduled for Thursday, was held over to Friday due to persistent rain in London.

With 48 hours to ruminate about the upcoming match, Barton could perhaps have been excused for letting the occasion overwhelm him.

But the 24-year-old instead was a picture of calm and steadiness throughout the match.

His serve firing, his back-court game clicking and his shots finding the mark, he powered through a near-perfect opening-set tiebreak.

When Khachanov stormed through the second-set tiebreak in similarly-dominant fashion, the match has suddenly taken a very different direction.

Yet against the tide, Barton responded, breaking serve in the sixth game to open a 4-2 lead and doing so again in the eighth game, blasting three winners in a sparkling stretch to cement a two-sets-to-one lead.

In the fourth set, a disastrous sixth game for Khachanov – ending on a backhand error – saw the Russian broken to love.

From that point, Barton never looked like relinquishing his advantage. Remaining loose and continuing to go for his shots, he powered through his next service game for a 5-2, and two games later, when serving for it, played a solid game to close it out.

“I feel like I’m pretty calm out there when I play, so that helps me a lot, and I just went with it. I mean, I just tried to do my best and try my hardest and see what happened,” Barton said.

“I thought I served really well. I just knew that playing on grass, try and serve as best as I could and I managed to do that. I didn’t get broken all match, not that I can remember, so that was the key thing. Just took care of it.

“Then got a bit lucky there in the third and fourth to break him, and that was it.”

In addition to Barton’s entry into the tournament being an eleventh-hour scenario, the Australian was forced to overcome physical hurdles once there.

After slipping three times in his first-round win and injuring his foot, intense treatment was required to get him through the subsequent rounds.

That process gave him something to focus on as he was forced to wait to compete in the most significant match of his career to date.

“I just prepared as best as I could, especially my ankle. Got it strapped, been treating it, getting a lot of treatment from the physios, so just making sure to try and get it 100 per cent. That was the main thing,” he said.

“I knew my body’s fit and can go the distance. I’m just relieved. I can’t believe it.”