Nick Kyrgios lit up a grey, wet day at The Boodles exhibition event with some audicious shot-making as he put the finishing touches on his Wimbledon preparations. 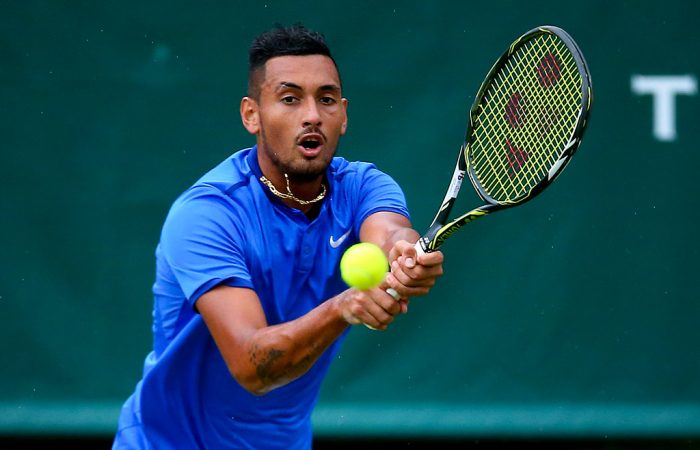 Grey and rainy English weather has failed to dampen Nick Kyrgios’s spirits on the eve of Friday’s draw at The All England Club.

Kyrgios dazzled fans with his shot-making and charisma during a brief exhibition match against Juan Monaco before declaring his game in tip-top shape for Wimbledon, which gets underway on Monday.

Australia’s big hope was scheduled to play Novak Djokovic at The Boodles event, just outside London, before the world No.1 pulled the pin for fear of being washed out and having his busy pre-Wimbledon schedule thrown out.

Kyrgios, though, was chuffed to get on court in his first outing since a first-round loss to Milos Raonic at Queen’s last week.

He only managed one set, which he won 6-4 amid a flurry of aces and other unreturnable bombs, but said even that 40-minute court time was “massive”.

“Even though I lost first round last week in Queen’s, I still feel I played pretty well,” Kyrgios said.

“Obviously Milos is playing unbelievably. He made the finals and he was up a set and a break against Murray.

“So I obviously lost to a quality player and I had chances to win that.

“So I was always confident even if I didn’t get on today, but that’s massive to get some more match play and against a quality player like Monaco as well, that’s priceless.”

He may polarise fans elsewhere, but Kyrgios wowed spectators in the garden-party atmosphere in Buckinghamshire, the setting for many a James Bond scene and where Bridget Jones goes for summer strolls.

A champagne cork flew onto the court at one point but it was Kyrgios who delivered a bottler display as fans sat transfixed wondering what trick shot the flamboyant performer would try next.

The umpire called a suspension in play with the Australian up 5-4 only to quickly follow up with: “Ladies and Gentleman, the players are continuing,” after Kyrgios urged Monaco to carry on in light drizzle.

The gesture prompted a huge roar from the crowd.

“I’m really enjoying it,” Kyrgios said. “The way they set it up, this event, is really enjoyable.

“Last year I was supposed to play but I was a little bit sick so that was unfortunate but with the right weather, it can be an unbelievable event.

“We still had a lot of fun out there today and Novak likes playing here. It’s a good warm-up for (Wimbledon).”

The Wimbledon draw will be held at the All England Club earlier on Friday (7pm AEST).