A straight-sets win over Marcelo Arevelo has put Matthew Barton just one win away from an unlikely Wimbledon main draw berth. 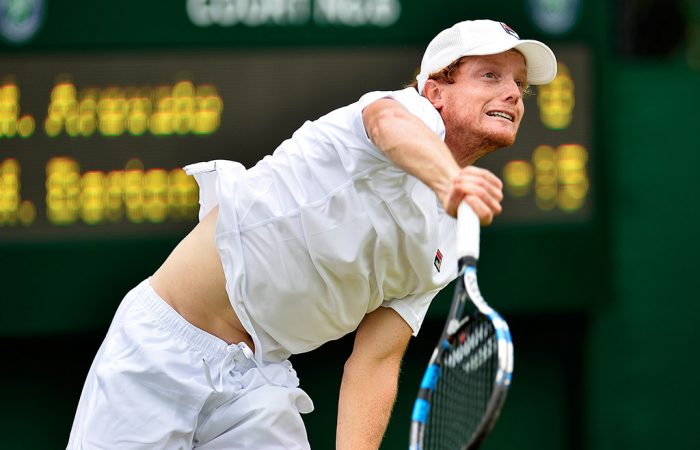 Matthew Barton didn’t even think he would be travelling to London for Wimbledon.

The Australian, ranked just inside the world’s top 250, was one place outside the cut-off for Wimbledon qualifying, until sneaking in as the last accepted player just as the entry deadline was closing.

Now, he stands one win from the main draw of The Championships.

The best Grand Slam result of his career was made possible by a commanding 6-3 6-4 victory over El Salvador’s Marcelo Arevelo on Wednesday at Roehampton.

Previously, the 24-year-old had never been beyond the second round of a major qualifying draw.

“It’s pretty surreal. I didn’t expect it. I mean I was the last one in (the draw). I did not expect to play this at all,” he said.

“I got an email about an hour before the deadline saying I was one out, and then half an hour later I was in, so it was really surprising. I’m making the most of that (laughter).

“It was just great. Relieved really, to get the win. In the second set I had the chance to have a big lead and I didn’t take it and he hung in there and kept fighting hard, and I knew he was fighting.”

Barton was feeling the effects of a foot injury – Achilles, to be precise – which he sustained through several slips in his first-round win on Tuesday.

Yet he was able to keep points short thanks to big serving and his overwhelming back-court power, and closed out victory in a brisk 54 minutes.

“I wasn’t too confident this morning,” he admitted, “but I’ll get it iced up again and hopefully I’ll be good for the next one.”

That next one comes against No.1 seed Karen Khachanov, who came through his second-round match against Enrique Lopez-Perez, 9-7 in the third.

That match will be a best-of-five set affair; apart from the Australian Open Play-off, Barton said he had never played a five-set match in an officially sanctioned tournament.

But given his improvements in the past six to 12 months – such as shaving 100 places off his ranking and picking up his first two ATP main draw wins earlier in 2016 – the New South Welshman is feeling good going into the biggest match of his career.

“I think (I’m) just being more professional, with everything that I do. I was always a bit sloppy with that, maybe, back when I was younger. And now just doing all the little things, the one percenters, I feel like they’re helping a lot at the moment,” he said.

“It’s a big moment for me. I’m pretty happy with how I’ve done at the moment. Just looking forward to the next round … I’m gonna be pretty pumped for that.”