Ash Barty began her Wimbledon qualifying campaign in perfect style with a straight-sets victory over China's Lu Jia-Jing on Tuesday. 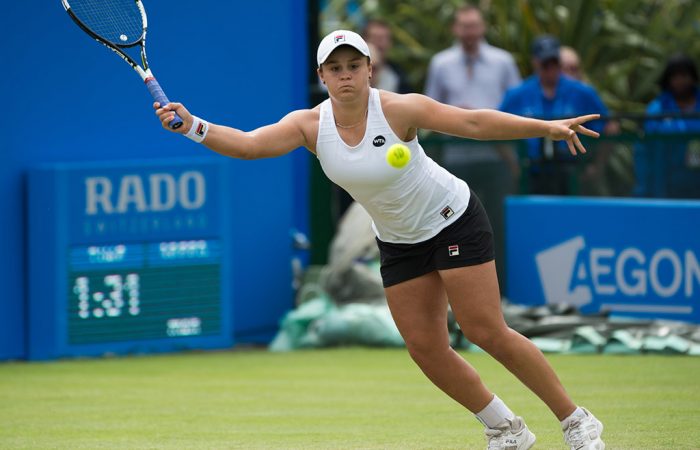 Continuing her excellent grasscourt form, Ash Barty raced through to the second round of Wimbledon qualifying at Roehampton on Tuesday.

The victory sets up a second-round meeting with Thailand’s Luksika Kumkhum.

Since returning to singles action at the ITF event in Eastbourne in late May after a near two-year absence, Barty has won 12 of her 14 matches.

All of those victories have come on grass; she reached the semifinals in Eastbourne as a qualifier, and then qualified for the WTA event in Nottingham before going on to reach the quarterfinals.

Unranked when she returned, the Queenslander has after just two events shot up to world No.335.

“It’s good to be back. It’s not always easy coming back here coming through quallies. I’m very lucky to be here,” she said.

“It’s just a different perspective now. It’s an absolute bonus for us to be here. We never thought we’d be in qualifying of a Grand Slam, third week back so it’s just nice to be ticking all the right boxes and actually getting a few results as well.”

Indeed, Barty – whose serve and forehand appear to have beefed up when compared against her “first” career – produced some special tennis when it was needed during her win over Lu.

Games went on serve throughout the entire first set but it was Barty who was rock-solid in the tiebreak, her weight of shot and aggressive baseline positioning overwhelming her Chinese opponent.

She went up an early break in the second but despite a succession of netted groundstrokes to lose her advantage, Barty continued to go for her shots, bringing up match point with a forcing forehand and sealing her triumph with a forehand winner.

“To play I think 13 matches in under two weeks was pretty phenomenal so it’s nice to be accumulating the wins and playing some good quality tennis as well,” she said.

“(My) body feels good. It’s always different coming out and playing matches than it is training. Obviously I’ve only been on the tour again for a couple of weeks so it’s going to keep taking time to get my body completely where I want it.

“It’s just the beginning. There’s a lot more to do.”