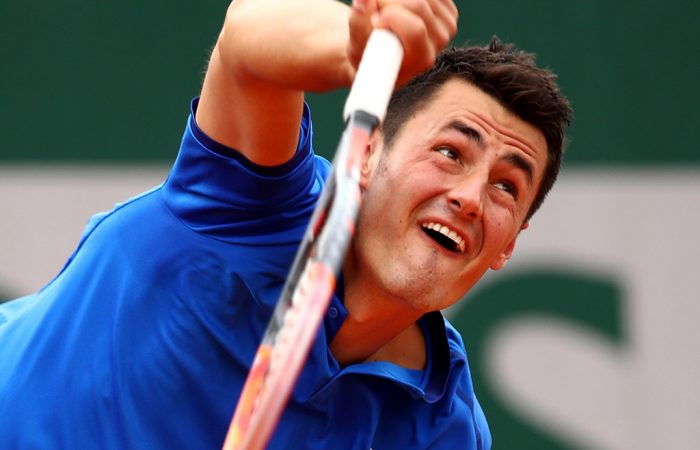 A gutsy, come-from-behind victory has propelled Australia’s last remaining hope, Bernard Tomic, into the quarterfinals at the Queen’s Club.

Tomic continued his hot start to the grass-court season with a 6-7(2) 6-4 6-4 victory over Spain’s Fernando Verdasco to set up a quarterfinal clash with Luxembourg’s Gilles Muller.

It is Tomic’s maiden quarterfinal appearance at Queen’s and gives him a 4-1 record over the tricky Verdasco, who was at times unplayable but then his own worst enemy as errors piled up in his search for scorching winners.

Tomic threw away a golden opportunity to take an early stranglehold on the match when, up 4-2 in the opening set, he allowed Verdasco to break back and ultimately force a tiebreak.

Verdasco, who had looked uncomfortable and miscued one forehand so badly that it exited the complex and landed in a neighbouring park, then sprung to life and demolished the Australian in the tiebreak.

He shot to a 4-0 lead with four blistering winners, leaving Tomic standing with hands on hips staring at his support box and laughing in disbelief.

Tomic couldn’t recover from there and conceded the first set, mystified at how he’d let it slip away.

He wasted little time in regaining parity, however, breaking Verdasco twice to secure a 4-0 lead in the second set.

He won 77 per cent of points on his first serve and saved one break point chance in rumbling through to take the second set and force a decider.

The 23-year-old was quick to pounce in the decider as well, grabbing the break in the third game before squandering a chance to go 5-2 up.

But it mattered little as he served out the match in two hours and two minutes.

Tomic will play for a semifinal spot tomorrow when he faces Muller, who played all of his get-out-of-jail cards in a stunning 3-6 7-6(16) 7-6(7) win over seventh seed John Isner.

Muller saved an incredible 10 match points against the big-serving Isner, and capitalised with his very first opportunity to win.