Nick Kyrgios exits Queen's after first round loss to world No.9 Milos Raonic 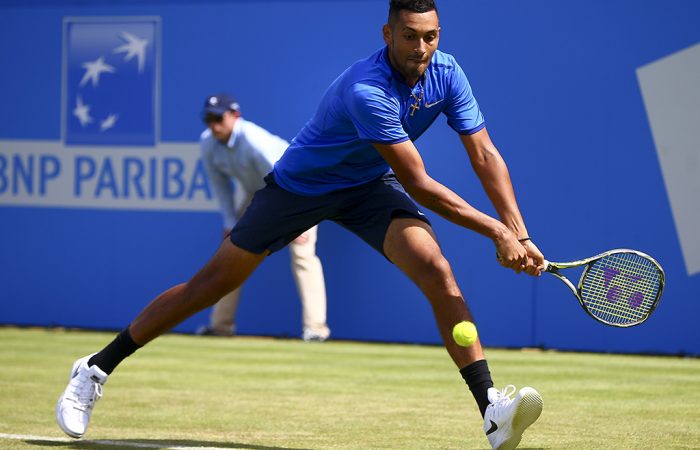 Nick Kyrgios remains confident of bouncing back to his best at Wimbledon despite suffering a setback with a first-round defeat to world No.9 Milos Raonic at the Queen’s Club.

For the second straight year, Kyrgios was bounced in his opening match at the traditional Wimbledon warm-up, going down 6-7(5) 6-4 6-4 to Raonic on Wednesday to leave Bernard Tomic as the lone Australian singles representative.

Tomic will play Fernando Verdasco on Thursday for a quarterfinal spot.

It was Raonic’s first victory over Kyrgios in 2016, after the Canberran took their previous two clashes, and kick-started the Canadian’s life under new coach, three-time Wimbledon champion John McEnroe.

Having started the day locked at a set apiece, with play held over from Tuesday night when players were forced from the court due to bad light, Raonic looked the more likely early on.

“I was really impressed with the way he played. He was trying to be really aggressive from the get go,” Kyrgios said.

“I felt really rushed. I didn’t serve well, I didn’t return well, I thought I probably didn’t do anything well today – at all – or yesterday.

Kyrgios was forced to dig deep in the third game of the day, but the Australian produced a big hold having given up a break point from being up 40-15.

Kyrgios recovered with two big serves to escape on that occasion and go 2-1 up before both players traded quick service games on the back of their booming serves.

But Kyrgios faltered when serving at 4-4, double-faulting in the windy conditions to hand the crucial break to his Canadian rival.

Raonic, who sent down 20 aces to Kyrgios’s 17, then served out the match to complete the two-hour-and-five-minute victory.

Kyrgios, pegged as a serious Wimbledon dark horse, said he remained unbothered about his form heading into the iconic grand slam, which begins later this month.

The big-serving Raonic barely looked like dropping his serve throughout the victory, with Kyrgios having just the two break-point opportunities – both squandered in the final game of the match.

Kyrgios did have his moments of magic, including a superb drop shot that forced an error from the two-time Grand Slam semifinalist to secure the first set tiebreak.

“I knew it was a tough draw. There’s heaps of tough players here,” Kyrgios said.

“I thought he was playing well. It wouldn’t surprise me if he goes really deep this week.”