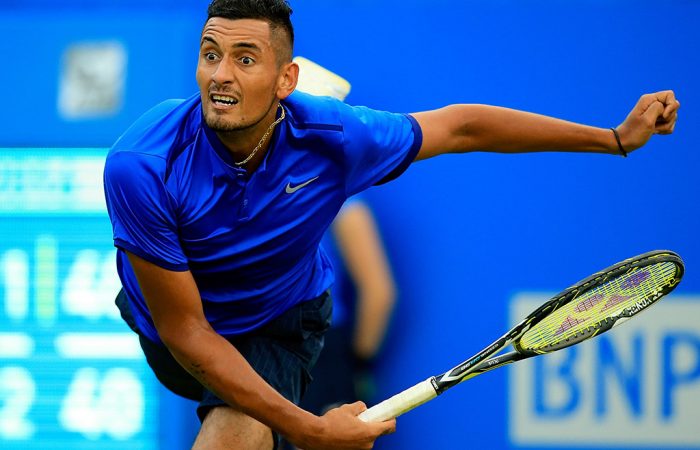 Nick Kyrgios’ Wimbledon warm-up plans have again been thwarted by England’s fickle summer weather, with his first-round clash at Queen’s Club forced into a second day due to rain and poor light.

Kyrgios was locked at a set-all 7-6 (7-5) 4-6 against Canadian world No.9 Milos Raonic late on Tuesday when chair umpire Mohamed Lahyani sent the players home for the night as the gloom took over.

The news was better for Australia’s No.2-ranked male, Bernard Tomic, as he beat the darkness to blitz world No.20 Kevin Anderson in straight sets and set up a second-round showdown with Fernando Verdasco.

Kyrgios looked to be confirming himself as a genuine Wimbledon threat as he took the first set from Raonic in a tense tiebreak.

Kyrgios, the world No.19, is chasing a sixth win against a top-10 opponent this year – a record bettered only by world No.1 Novak Djokovic (16 wins) and world No.2 Andy Murray (six).

The big-serving Raonic never looked like dropping his serve in the opening two sets, but it was Kyrgios who emerged the stronger from the first-set tiebreak having earlier saved two set points.

Kyrgios produced a superb drop shot to force an error from the two-time Grand Slam semifinalist which secured the first set and prompted the Australian to turn to his box and bellow “that’s just class mate”.

Raonic, who is now working with seven-time Grand Slam winner John McEnroe, lifted the tempo to start the second set and earned the vital break in the fifth game – after Kyrgios had saved four break points.

Raonic then lent on his booming serve, which earned 14 aces across the two sets, to take the second set and force a decider before they were ordered from the court.

They will return as the second match on centre court on Wednesday.

Elsewhere in the draw, top seed and defending champion Andy Murray advanced with a 7-6 (10-8) 7-6 (7-1) win over Nicholas Mahut as he seeks a record fifth title at Queen’s.

But second seed, and two-time Grand Slam champion, Stan Wawrinka was upset in straight sets by Verdasco, who spoke for most in lamenting the dreary English summer.

“Unfortunately here in England this happens almost every year. So you already have it in your mind that it’s some possibility,” he said following his 6-2 7-6 (7-3) victory.

Daria Gavrilova’s opening round match at the WTA tournament in Birmingham was also affected by the inclement weather.

The world No.50 trailed Great Britain wildcard Naomi Broady 4-6 4-2 when play was abandoned for the day.