Ash Barty has pushed world No.17 and top seed Karolina Pliskova all the way before ultimately bowing out in the quarterfinals in Nottingham. 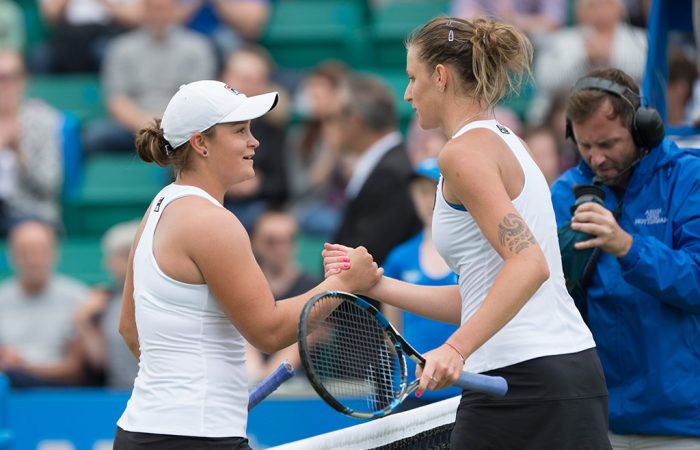 Ash Barty’s good run of form at the Aegon Open Nottingham has come to an end with the Queenslander going down narrowly 7-6(2) 7-6(7) to top-seeded Czech Karolina Pliskova in the quarterfinals.

Barty had two set points in the first set, was a break up in the second and then led 4-2 in the last tiebreaker but was unable to capitalise against her big-serving opponent who fired down 20 aces.

“I had enough chances in the first and second set – it’s disappointing not to convert. Karolina played the big points pretty well. I didn’t do a hell of a lot wrong until the second-set buster,” Barty said.

“It’s nice to know that straight off the bat that I can come in and compete with some of the best in the world which is really good.

“This week has just been a massive bonus for us. Being able to get so many matches against quality players has been good.”

Pliskova was to play fourth-seeded Monica Puig of Puerto Rico in the semifinals late Saturday. The quarter-finals were washed out on Friday.

Puig defeated Tamira Paszek of Austria 6-4 6-3 to reach her first semifinal since January in Sydney.

The other semi featured the unseeded Alison Riske of the United States against Saisai Zheng of China.