Barty: “it’s nice to know I can still play at this level”

Ash Barty has exceeded her own expectations by going 11-1 in her return to singles and reaching at WTA quarterfinal in just her second tournament back. 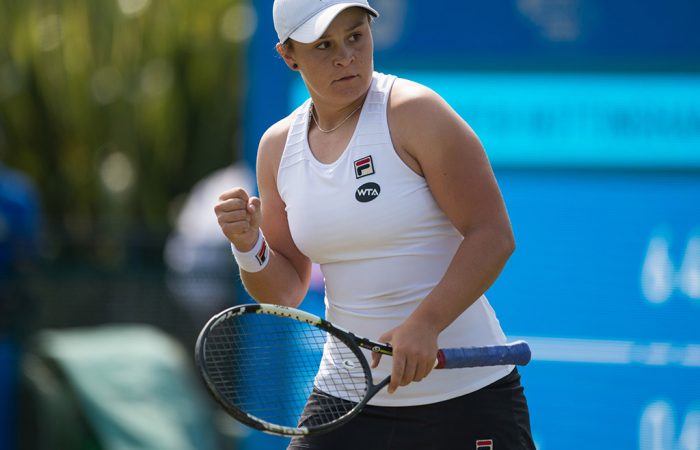 Ash Barty may be keeping her fingers crossed for a Wimbledon wildcard but says she’s revelling in her return to tennis following her 18-month cricket sabbatical.

Barty, 20, who won junior Wimbledon in 2011, charged into the quarterfinals of the Nottingham Open WTA grass court event on Thursday with a 6-0 4-6 6-4 win over Andrea Hlavackova of the Czech Republic, setting up a last-eight clash with Karolina Pliskova.

Pliskova, who is the competition’s top-seed, is 17th in the world rankings – 606 places above Barty who resumed her career in February following a stint in cricket with Brisbane Heat.

“Karolina is a quality player. She has had a fantastic two years. It is going to be a really tough challenge but I’m looking forward to it,” Barty said.

She is yet to find out if she’ll get the chance to reacquaint herself with the All England Club later this month but said she feels very at home playing on grass.

“It’s nice to know that I can still play at this level,” she said.

“I’m not in a position to be playing Wimbledon at the moment. So I will have to try and receive a wildcard and if I do, that’s great. And if I don’t, then it isn’t the end of the world.

“We didn’t expect by any means to be coming here and be 11 and 1 and in the quarter-finals of a WTA event the second week in.

“It’s just nice to get through a few matches, but it is definitely nice to string them together.”