Kyrgios: no injury fears for Wimbledon

Despite being hampered by injury in his third-round French Open loss, Nick Kyrgios is confidence he will be ready to go for Wimbledon. 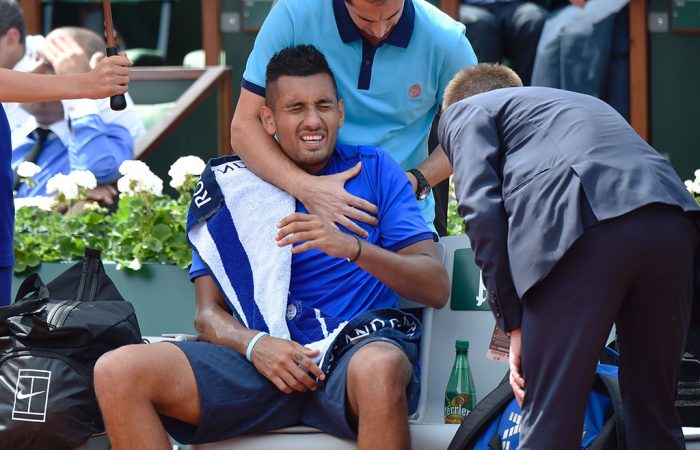 Nick Kyrgios is confident the shoulder complaint which hampered him during a third-round French Open defeat won’t cruel his Wimbledon hopes.

Kyrgios required treatment and complained of his ball toss and backhand being affected by the left shoulder injury during his 6-2 7-6(7) 6-2 loss to Frenchman Richard Gasquet.

It contributed to a surprisingly one-sided showing on Court Philippe Chatrier, after the 21-year-old Aussie entered the claycourt Grand Slam as the consensus dark horse on the back of promising performances on clay in reaching the semifinals in Estoril and quarterfinals at the Madrid Masters.

He holds the second-best record against top-10 players in 2016, behind only raging hot favourite and world No.1 Novak Djokovic, and will again be favoured to make a deep run at Wimbledon – where he has enjoyed success before.

In his two appearances at Wimbledon, Kyrgios reached the quarter-finals in 2014 and the fourth round last year, leaving expectations high for 2016 – should he be injury-free.

Kyrgios doesn’t anticipate having any problems, and has two weeks before his next assignment – the traditional Wimbledon warm-up event at the Queen’s Club.

“No (it’s not a concern), I don’t have another tournament for a while now,” Kyrgios said.

“I can just get treatment and just look after it.”

Both Kyrgios and Bernard Tomic will contest a star-studded Queen’s tournament, which is also expected to include world No.2 Andy Murray, world No.4 Stan Wawrinka and world No.5 Rafael Nadal.

Despite an encouraging claycourt season, there’s little doubt Kyrgios will be welcoming a return to the grass ahead of an assault on Wimbledon.

“I’ve had my best results on it, my expectations are high and I’m expecting some good results from myself at Queen’s this year.

“The conditions are perfect, great preparation for Wimbledon, and all the Australians have played well there over the years.”