Dylan Alcott and Heath Davidson have won Gold in the quad event at the BNP Paribas World Team Cup. 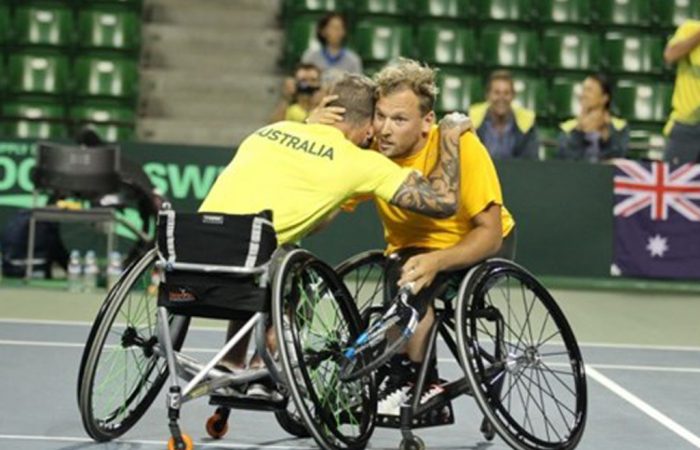 Dylan Alcott and Heath Davidson have claimed gold in their first appearance at the BNP Paribas World Team Cup. The Australian duo downed Team GB in the final of the Quad event to be crowned World Champions.

Under the Centre Court roof at the Ariake Coliseum in Tokyo, rookie Heath Davidson opened the tie for the Aussies against the experienced Jamie Burdekin. In a tight match, Burdekin took out the rubber 6-3 6-4 to hand the advantage to the Brits.

World No.1 Dylan Alcott was next up, facing Andy Lapthorne in what was now a crucial match. Alcott started strongly, sweeping Lapthorne aside in the first set 6-2. One break was the difference in the second, with the Aussie securing the set 6-4 and forcing the third rubber.

Like the matches that preceded it, the deciding match was a tough, tight affair. But the Aussies dug in when it mattered, securing the win – and the title – 6-3 6-4.

“The singles against Andy was the highest quality match I’ve played in, and Jamie stepped up in his singles with Heath,” Alcott told the ITF.

“Heath’s played so well in the doubles this week that instead of targeting him they started hitting it to me today.”

Davidson was keen to stress how much he enjoyed making his debut for the Green & Gold in Tokyo: “It’s been awesome, I loved it. I didn’t feel under any pressure, I just felt like I was out here hitting tennis balls with a mate.”

But amidst the jubilation there was one word of caution from World No.1 Dylan Alcott: the cat is now out of the bag about the Aussie duo.

“We probably play a different brand of tennis, erratic and all over the shop,” Alcott said. “We’ve got the Paralympics coming up. Good, tough teams had never seen how we play before this week, but now they’ve seen us they’ll be thinking they can work out how to beat us.”