Tomic ousted by Coric in Paris

Despite not at his best physically, Bernard Tomic fought hard before going down in four sets at Roland Garros to Croatia's Borna Coric. 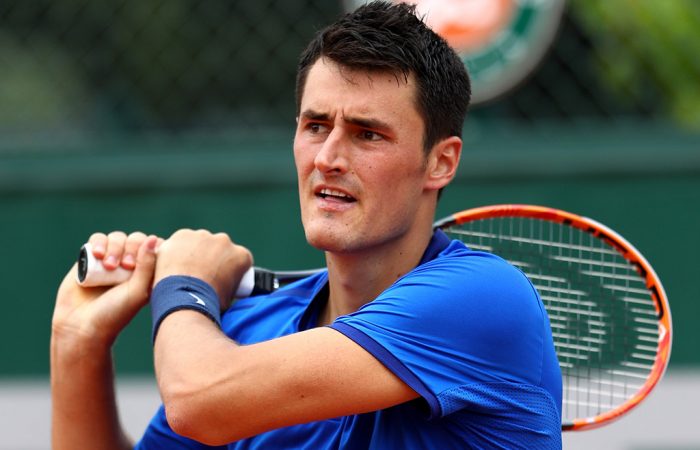 Bernard Tomic has been knocked out of the French Open following a four-set defeat in which he complained of dizziness.

Tomic required medical assistance early in the third set, down 2-1, and complained of feeling “dizzy and unwell” to the match umpire.

After being given some medication, the 23-year-old recovered with a quick service game immediately after, levelling the set at 2-2.

He battled on to force a tiebreak, but struggled to stay in long rallies and became heavily reliant on hitting winners during the two-hour-and-47-minute defeat.

He fell behind in the tiebreak, then rallied to save two set points, before Coric wrapped it up 7-4 to take a two-sets-to-one advantage.

Tomic continued to struggle with his movement in the fourth set and regularly found himself fighting to stay in service games – but continually found ways to stay in the match, saving five break points in the fifth set and 10 for the match.

In the fourth-set tiebreak, Tomic twice earned a “mini-break” but stumbled when serving for the set at 6-5 – first putting a backhand slice and then an attempted crosscourt forehand into the net to give Coric a second match point.

After a tense rally, Tomic again faltered – sending a big forehand too deep, prompting Coric to let out a mighty roar as he set up a third-round clash with 14th seed Roberto Bautista Agut.

Tomic had the better of his young rival in the early stages of the match, breaking Coric in the second game before racing to a 4-1 lead as Hewitt and Kyrgios shouted encouragement from the stands.

The 20th seed looked comfortable on serve, saving the two break points he offered up, and closed out the set 6-3 in 27 minutes.

However, momentum shifted early in the second set as Coric grabbed the early break – though Tomic immediately hit back to level the scores at 2-2.

Tomic then missed drop shot, when serving down 2-3, which proved crucial as Coric broke again to take a hold of the set.

Tomic’s good sportsmanship was soon on show, overruling the umpire on a Coric winner which was called long in the following game, but the good karma didn’t fall his way and Coric took the set 6-2 in 31 minutes with another break.