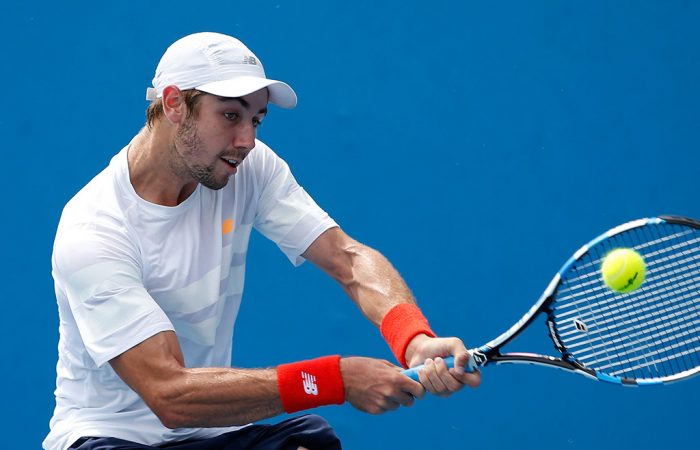 The experience of playing on Court Philippe Chatrier at Roland Garros was enough to give French Open wildcard Jordan Thompson chills – and that was just for practice.

For the 22-year-old, the opportunity to play the French Open this week – his first Grand Slam outside of three first-round exits at the Australian Open – is enormous.

Thompson admits he’ll be a bundle of nerves when he walks out on the famous red clay to face Serbian qualifier Laslo Djere in the first round on Sunday.

“I think I would be a little bit worried if I wasn’t nervous, playing a Grand Slam in another country for the first time,” he said on Friday.

“I’ve played qualifiers here before, I’ve played juniors. I think that really helps with being here and playing the same tournament.”

The rising star familiarised himself with the Parisian centre court this week when he and fellow wildcard Bjorn Fratangelo of the USA were given the court for a practice session.

“That was pretty cool, hitting on the centre court at the French Open,” he said. “I don’t know how we scored that, two wildcards.”

Thompson has enjoyed an impressive surge up the rankings in 2016, cracking the top 100 following ATP Challenger Tour wins in China and France that helped land Tennis Australia’s coveted reciprocal wildcard with the French Tennis Federation.

“Self belief?” Thompson offered, when asked what had changed to spark his good form.

“Winning matches (helps), I’ve won two tournaments. I’ve just been working on my game and everything is improving.”

He also comes armed with experience against some of tennis’ biggest names, including local hope and ninth seed Richard Gasquet, which he hopes will serve him well on the big stage.

Thompson pushed Gasquet to the limit at the Kooyong Classic exhibition – an Australian Open tune-up – two years ago before losing in a tiebreak.

“That will give me a lot of confidence that I’ve pushed big players before,” he said.

“I’ve never played a five-set match on clay before, but I won’t doubt myself.”