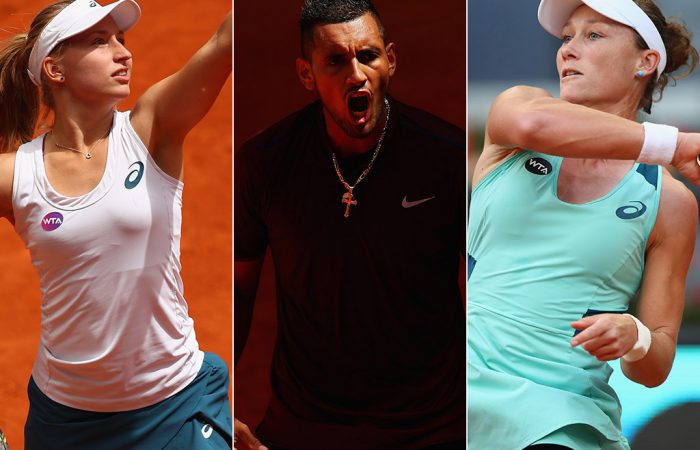 Nick Kyrgios has landed in a stacked section of the Internazionali BNL d’Italia as he attempts to continue his promising build-up to the French Open.

The young Australian has been drawn in an incredible top quarter of the draw, bookended by Novak Djokovic and Rafael Nadal and also containing in-form seeds Milos Raonic and Gael Monfils.

Should he progress through the draw, Nadal would likely await in the third round, and Djokovic in the quarterfinals.

Kyrgios reached the quarterfinals at last week’s Mutua Madrid Open, defeating No.4 seed Stan Wawrinka on the way before ultimately falling in a torrid three-setter to Kei Nishikori.

Kyrgios’ compatriot Bernard Tomic fell in the opening round in Rome on Sunday, retiring due to illness during the first set of his match against Frenchman Benoit Paire.

In the concurrent women’s event, Sam Stosur and Daria Gavrilova have landed in the same section of the draw, and like the one Kyrgios found himself in, this one is tough.

Gavrilova faces a second-round match against No.6 seed Simona Halep should she get past German Sabine Lisicki, while Stosur opens against qualifier Alison Riske before a projected second-round meeting with ninth seed Svetlana Kuznetsova.

Should they win through, Gavrilova, who reached the semis in Rome last year, and Stosur, who has won nine of her past 14 claycourt matches in 2016, would clash in the third round.

Last week in Madrid, Stosur and Gavrilova both reached the quarterfinals, with Stosur advancing a step further to the last four.

World No.1 Serena Williams heads their quarter as the Rome tournament’s top seed.