It was victory for a pair of Victorians as Matthew Romios and Jaimee Fourlis captured the singles titles at the Gallipoli Youth Cup. 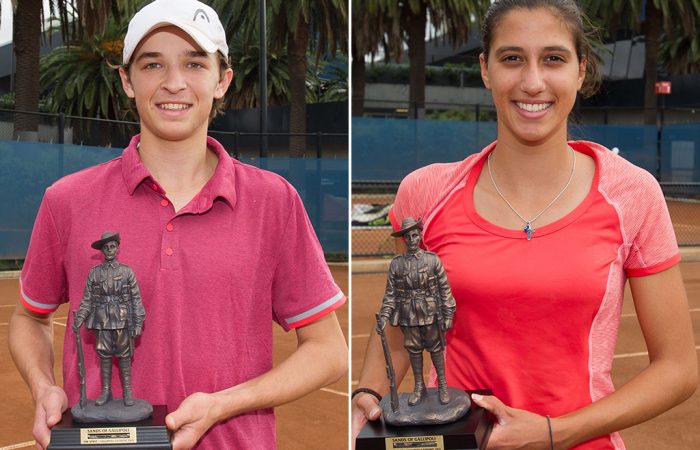 Fourlis looked strong all week with straight sets victories against each opponent. The win today is the icing on the cake after she finished runner-up at the same tournament in 2014.

“It feels good to get the win, I was pretty nervous like anyone would be in a final,” she said.

“I really wanted to win this tournament. I really like the trophy and of course its connection to Gallipoli and ANZAC day and what it stands for.

“When I lost two years ago I was pretty devastated so I was really excited to win this tournament to be honest.

“2016 has been pretty good. I won my first pro circuit event which honestly I didn’t think I would win. And this tournament will set me up hopefully for the junior Grand Slams.

“I’d like to thank my team, Betty, Stefano and everyone at TA, my dad, sister and mum.”

Meanwhile, the win for Romios was a huge relief for the 17-year-old.

Romios defeated fellow National Academy athlete Lucas Vuradin (Sydenham, Vic), 7-5 6-3, in his first ITF junior tournament back after six months away from the game due to injury.

Romios was elated with the victory.

“Yes it definitely feels good to be back after being out for so long because of injury, it’s good to get the first win on the board,” he said.

“It means a lot just to be out there even competing, I wasn’t expecting to get the win.

“I was just really happy to be out there competing with all the guys I use to play against and grateful enough to get the win.

“The conditions were pretty good earlier in the week. Perfect conditions, perfect courts. Later in the week it started to get windy and the courts were getting heavy.

“I didn’t have the nicest of draws, a string of seeds but being unseeded that is what you expect.”

“I want to thank my parents and coaches for supporting me through the times of being off for so long. It was obviously tough. Also to Ryan Cope, my physio for transitioning me through the week and progressing me until I was able to play this tournament.”