Daria Gavrilova kicked off the nationwide distribution of second-hand racquets to children in need when she visited Dinjerra Primary School in Braybrook, Victoria. 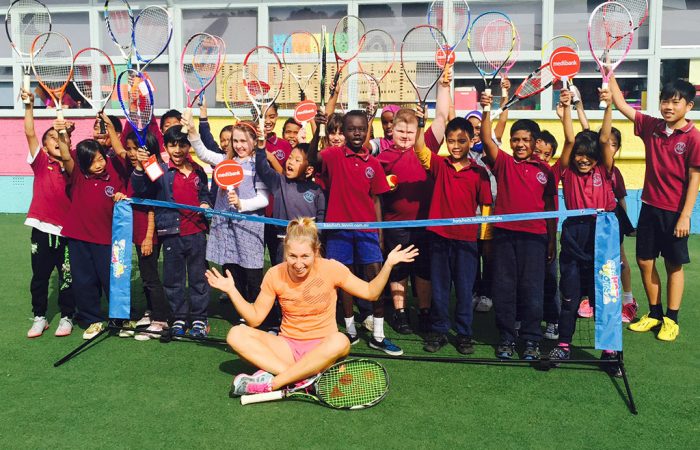 The next generation of Aussie tennis stars has received a boost, with Medibank and Tennis Cares this week delivering hundreds of pre-loved tennis racquets to junior fans around the country.

Launched in the lead-up to the Australian summer of tennis, the Medibank Second Serve campaign encouraged Australians to donate unused and unwanted tennis racquets to help children in need become more physically active.

More than 300 racquets were donated to the cause, with world No.39 Daria Gavrilova today kicking off the nationwide distribution at Dinjerra Primary School in Braybrook, Victoria.

Fiona Le Brocq, Medibank general manager brand and marketing said Second Serve is about helping others to play, and Medibank is thrilled with the community support for this initiative.

“We are committed to helping Aussies take steps towards better health, and through Medibank’s Second Serve more than 300 kids who might not otherwise have the chance, can now get to go out and have a hit – that’s just terrific.”

Gavrilova said the Medibank Second Serve campaign was a great way to encourage more Australian children to get involved in tennis.

“It’s really great to see so many kids receive a racquet and hopefully it inspires them to get out on the tennis court and improve their tennis,” she said.

“Tennis is a great sport for kids because it teaches them so many physical and social skills and they can continue playing their whole lives. I hope all the kids enjoy their new racquets and have a great tennis experience.”