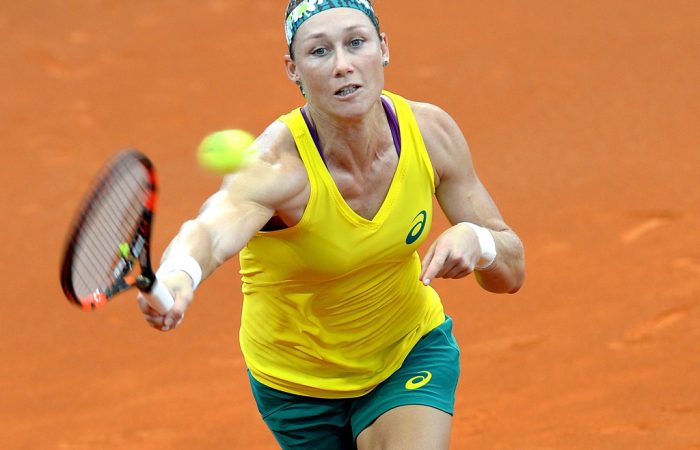 Vandeweghe, who was a late nomination change for the injured Madison Keys, overcame Stosur 2-6 7-5 6-4 at Brisbane’s Pat Rafter Arena.

Stosur hit the court with intent on Sunday and made a cracking start to the match, wrapping up a dominant first set in just 28 minutes.

But Vandeweghe started to find her range in the second, the American making the most of her big serve and powerful groundstrokes. With the set seemingly destined for a tiebreak, Vandeweghe took advantage of a loose game from Stosur and broke for 6-5. Holding her nerve, the American served it out to force the decider.

The third set was an equally tight affair, settled by the single break. Vandeweghe struck early, breaking in the first game, and didn’t look back. Stosur had points to break back at 5-4, but the World No.36 held her nerve and served out the match.

It extends the USA’s lead in the tie to 3-0 and ensures a return to the eight-nation World Group next year, while Australia’s long wait for Fed Cup glory continues.

“Even though you’re at your home stadium and everything else, it doesn’t mean you’re going to win,” Stosur said.

“You’ve still got to bring it and we tried our best here this week, and played some pretty good tennis, but unfortunately came up short.”

“I knew that today was do-or-die, but kind of every match on tour’s like that as well – if you don’t win, you’re out,” she said.

“It’s just probably that little bit different because you are playing for your country rather than yourself.”

Vandeweghe returned to the court with Bethanie Mattek-Sands to finish the tie for the US, winning 6-1 6-4 in the doubles dead rubber against Gavrilova and substitute Arina Rodionova.