Christina McHale has beaten Sam Stosur to hand the US team a 2-0 lead after the first day of the Fed Cup tie. 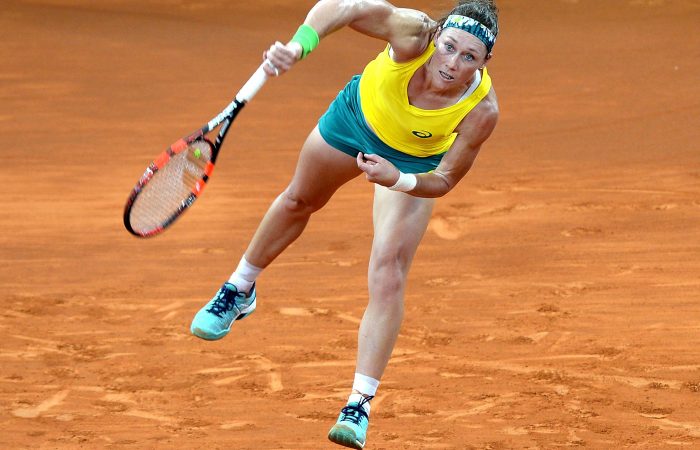 The United States have taken a 2-0 lead in their Fed Cup tie against Australia after Samantha Stosur succumbed to Christina McHale.

Top-ranked Australian Stosur looked well and truly in control for the first hour of the match but struggled in the second set before being edged in the third, losing 3-6 6-1 7-5 to the world No.57 at Brisbane’s Pat Rafter Arena.

McHale was a surprise singles nomination for the USA team ahead of the higher-ranked Coco Vandeweghe. But it proved a masterstroke move by captain Mary Joe Fernandez, as the 23-year-old turned the match on its head after losing the first set.

Stosur made 44 unforced errors to McHale’s one – including 11 in a one-sided second set.

Stosur fought back in a tense deciding set, but McHale was able to break in the eleventh game and close out the victory.

It is McHale’s first ever career win over Stosur, having failed against her four times previously – the most recent loss coming only last month in another tight three-setter at the WTA event at Indian Wells.

Earlier, Daria Gavrilova was overpowered 6-4 6-2 by world No.22 Madison Keys in the opening rubber.

“No question, we’d prefer to be at 1-1 at worst,” captain Alicia Molik said.

“But it is what it is and we have been there before. We know the feeling – it is about regrouping, believing and trusting ourselves tomorrow.

“I think Dasha and Sam can rise to the level tomorrow. It’s an enormous task for us (but) it’s about Dasha and Sam continuing to do what makes them great players on the singles court and really backing themselves.”

Stosur shrugged off suggestions the weight of expectation or pressure from her hometown crowd might have been behind her 3-6 6-1 7-5 defeat to McHale, ranked No.57 in the world, on the temporary clay surface installed at the venue.

“Overall, she had a lot better composure in the really important moments,” Stosur said.

“There’s nothing wrong with the way that I played, I just had to do that little bit more.”

Earlier, Gavrilova was overpowered in a 6-4 6-2 defeat to Keys, whose booming serve was too much for the Russian-born starlet to handle.

US captain Mary Joe Fernandez provided a selection shock by nominating McHale for singles ahead of the higher-ranked Coco Vandeweghe but it proved a stroke of genius.

“(But) that second match could have gone either way. It was really tight at the end – a couple of points made the difference.

“Madison started us off on a very positive note which always helps. So far, so good.”