Madison Keys beat Daria Gavrilova to hand the USA a 1-0 lead over Australia in the Fed Cup tie. 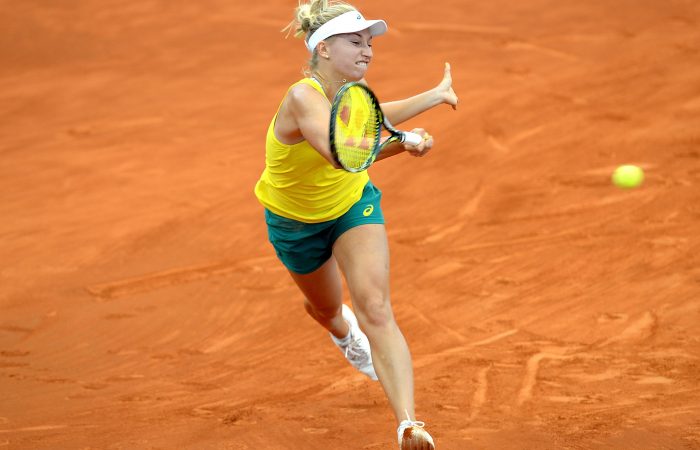 The United States have taken a 1-0 lead in their Fed Cup tie against Australia with world No.22 Madison Keys beating Daria Gavrilova in straight sets.

Keys overpowered Gavrilova, who was representing Australia for the first time, to a 6-4 6-2 victory on Saturday at Brisbane’s Pat Rafter Arena.

In the first meeting between the pair at professional level, world No.39 Gavrilova wasn’t able to gain the advantage she had been hoping for over Keys from the temporary clay surface installed for the tie. Instead, she was pinned back behind the baseline and in the corners by Keys’ booming serve, which locked up her movement on the surface.

Gavrilova tried to hang on in the second set and saved eight break points, but there was no slowing Keys, who wrapped up the win in an hour and 17 minutes.

“All credit to her, I created some opportunities for myself but didn’t convert them,” Gavrilova said. “I expected a big ball but she played really well, she was pretty much on from the first point and she showed it, even in the five-minute warm-up that she wanted it.

“I adjusted a bit to her game in the second set and maybe was respecting her big ball too much and started looping and playing higher balls a bit too often. I just wasn’t aggressive enough.”

Gavrilova admitted to a few pre-match butterflies but said the on-court presence of captain Alicia Molik helped steel her nerves in her Fed Cup debut.

“I felt pretty comfortable in the end. Having the crowd behind me was something special. Even though I lost, it was a great experience and it was very special,” she said.

The result gives the 17-time Fed Cup-winning USA team a slender edge in what looms as a neck-and-neck battle over two days with Australia for a spot in next year’s World Group.

“We’re obviously now on the board and it’s just a little less pressure.”

Samantha Stosur will face Christina McHale, a surprise US singles nomination ahead of the higher-ranked Coco Vandeweghe, in Saturday’s second singles rubber.