Daria Gavrilova will begin the day's play in her first Fed Cup tie for Australia. 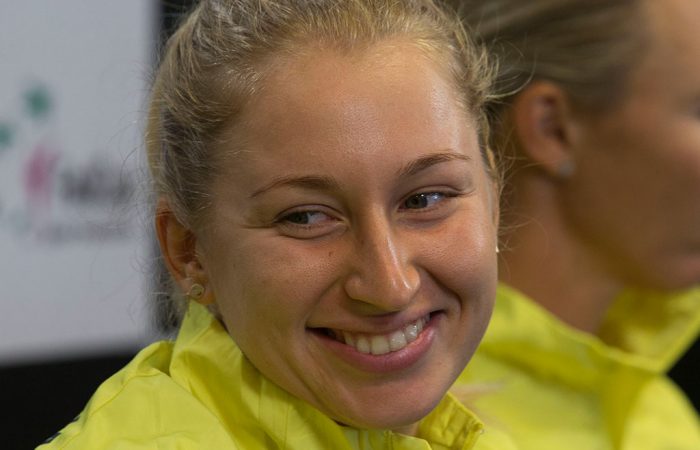 Daria Gavrilova admits nerves will be a factor when she leads Australia’s Fed Cup charge against the United States in Brisbane.

Russian-born Gavrilova, who became an Australian citizen in December and was cleared to represent her adopted country by the International Tennis Federation last month, has been drawn to face world No.22 Madison Keys in on Saturday’s opening match of the World Group playoff at Pat Rafter Arena.

“I’ll be a bit nervous, but I have a great team,” Gavrilova said on Friday. “I think having a captain helping me out at every changeover is going to help me a lot because I think I take the information pretty well, so I’m going to listen to Alicia. I think I should be OK.”

Gavrilova and Keys have never met before at professional level.

“I think we played each other when we were about 13 but I can’t remember much from that,” she said. “Clay is my favourite surface and I know it’s not her’s, so I get a bit of an advantage, and having the home crowd behind us will help us a lot too.”

Keys said she had sought advice from Sloane Stephens, who beat Gavrilova in straight sets last week at the WTA event in Charleston.

“Obviously, we’ve been around the same tournaments so it’s not like I don’t know who she is or how she plays,” Keys said. “She’s obviously had a really good year and is playing well, especially in Australia. It will be tough.”

In Saturday’s second match, Samantha Stosur take on surprise US singles selection Christina McHale, ranked world No.57 and receiving the nod ahead of Coco Vandeweghe (No.36).

Stosur has a 4-0 career record over McHale, with their most-recent meeting only last month at Indian Wells.

“That was a really tough three-setter but I was down in that third set so I guess that gives a little bit of comfort, knowing I came back from a bit of a deficit and just having that fresh knowledge of how she’s playing at the moment can help as well.

“But that goes both ways.”

The reverse singles rubbers will be played on Sunday but both teams can change their selections if they wish.

As expected, Casey Dellacqua and Stosur will take on Bethanie Mattek-Sands and Vandeweghe in Sunday’s doubles.