In a match-up between one of the tour's most in-form players and one of its most explosive, Milos Raonic and Nick Kyrgios will go head-to-head in Miami for the fourth time. 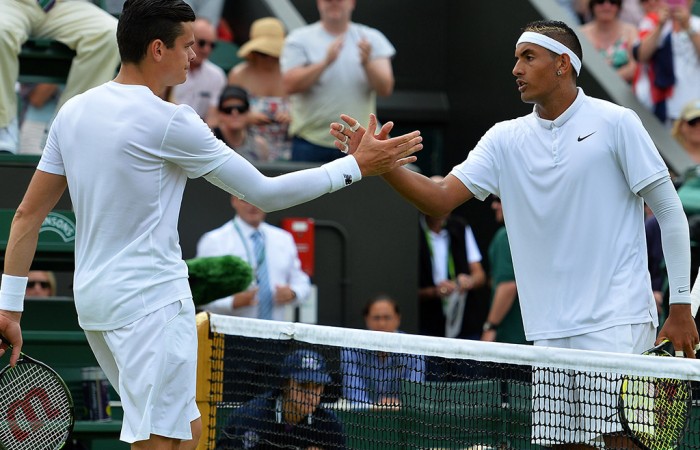 Nick Kyrgios and Milos Raonic have a habit of meeting on the game’s biggest stages.

Their three career meetings to date have all come at Grand Slam tournaments, while their fourth – scheduled for Thursday in Miami – will unfold at one of the most prestigious events outside of the four majors.

It’s arguably the most exciting of the four men’s quarterfinal match-ups at Crandon Park, pitting two members of the game’s next generation against one another.

Although Raonic is slightly older than the Australian, at 25, he is perhaps the most successful of the 1990s-born generation of players and is widely tipped to flourish at the top when the Big Four finally relinquish their vice-like grip on men’s tennis.

Kyrgios is another pegged for greatness; the 20-year-old has all the power, weapons and swagger of a champion and in his short career has already shown a penchant for the spotlight.

It rarely burns brighter than it does in Miami.

In Raonic v Kyrgios, we have a match-up between two of the most successful players of 2016.

Kyrgios opened his year with victory at the Hopman Cup and followed it up in February with his first career ATP title in Marseille.

Next came a semifinal run in Dubai before his trip to the quarterfinals in Miami, his best performance at an ATP Masters event.

By reaching the last eight, Kyrgios became the first Aussie to go this deep in Miami since Lleyton Hewitt did so 14 years prior.

What’s more, he’s yet to drop a set, and even if he were to fall to Raonic, he is projected to rise to a career-high ranking of No.22.

Yet it will be a tough ask against the in-form Canadian.

Raonic is a sparkling 17-2 so far this season, helped by his win at the Brisbane International, semifinal run at Melbourne Park and finals appearance at Indian Wells.

Like Kyrgios, he is yet to drop a set in Miami and is yet to be broken in 30 service games.

At stake for Raonic? A return to the world’s top 10.

This is their first meeting on a hard court; their last came in the third round at Wimbledon last year, in which Kyrgios scored his first win over Raonic in four sets.

Their Miami showdown will be all about huge serving, first-strike tennis and who can embrace the big moment best.

Raonic may hold the slight edge in favouritism and form, yet few young players thrive on the big stage quite like Kyrgios.

One thing’s for certain – we’ll be glued to our TV screens to catch every minute of the action.

Find out where you can too.